By Texas Moratorium Network On February 27, 2014 · Add Comment · In Uncategorized From the New York Times:

In the 10 years since Texas executed Cameron Todd Willingham after convicting him on charges of setting his house on fire and murdering his three young daughters, family members and death penalty opponents have argued that he was innocent. Now newly discovered evidence suggests that the prosecutor in the case may have concealed a deal with a jailhouse informant whose testimony was a key part of the execution decision.

As he worked through the stack of papers, he saw a note scrawled on the inside of the district attorney’s file folder stating that Mr. Webb’s charges were to be listed as robbery in the second degree, not the heavier first-degree robbery charge he had originally been convicted on, “based on coop in Willingham.”

Mr. Benjet recalled a “rush of excitement,” he said, and thought, “This is what we’ve been looking for.”

The Innocence Project submitted the note, which is not dated or signed, in a new filing to the board asking that it be included as part of its September request for a pardon.

Barry Scheck, co-founder of the Innocence Project, called the note a “smoking pistol” in the case.

By Texas Moratorium Network On February 11, 2014 · Add Comment · In Uncategorized 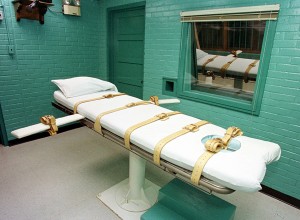 According to USA TODAY:

Washington Gov. Jay Inslee on Tuesday announced a moratorium on the death penalty in the state, saying capital punishment was being used inconsistently and unequally.

The Democrat said his decision came after months of research on current cases and discussions with prosecutors, law enforcement officials and family members of homicide victims. He also said he toured death row and the execution chambers at Walla Walla State Penitentiary.

“Equal justice under the law is the state’s primary responsibility,” Inslee said. “I’m not convinced equal justice is being served.”

He said use of the death penalty sometimes depends on the budget of the county where the crime occurred because “the costs associated with prosecuting a capital case far outweigh the price of locking someone up for life without the possibility of parole.”

The moratorium does not commute the sentences of those on death row or issue any pardons, but Inslee will grant reprieves so no one will be executed.

Since the state’s current capital punishment laws were put in place in 1981, 32 defendants have been sentenced to die. Of those, 18 had their sentences converted to life in prison. One was set free. The state’s last execution was in September 2010, when Cal Brown died by lethal injection for the 1991 murder of a Seattle-area woman.

Nine men are on death row in Walla Walla.

“I want to acknowledge that there are many good protections built into Washington state’s death penalty law,” Inslee said. “But there have been too many doubts raised about capital punishment. There are too many flaws in the system. And when the ultimate decision is death, there is too much at stake to accept an imperfect system.”

Maryland abolished the death penalty in May, the sixth state to do so in seven years.

Inslee said he did not question the guilt of the condemned criminals nor the seriousness of their crimes.

“With my action today, I expect Washington state will join a growing national conversation about capital punishment,” he said. “I welcome that, and I’m confident that our citizens will engage in this very important debate.”

By Texas Moratorium Network On January 25, 2014 · Add Comment · In Uncategorized

Please write a clemency letter to the Texas Board of Pardons and Paroles and another to Governor Perry on behalf of Suzanne Basso, who is scheduled for execution in Texas on February 5. Basso would be the fifth woman executed in Texas since the state resumed executions in 1982. Ask the board to commute her sentence to life because of her mental illness and poor health. She is paralyzed from the chest down. You can mention that you are not seeking to minimize or excuse her crime, but that you are urging that her execution be stopped on humanitarian grounds because of her mental illness and poor physical health.

Basso, a New York native, is paralyzed from the chest down, and testified at a December competency hearing from a hospital bed wheeled into Judge Mary Lou Keel’s 232nd State District Court.

Basso’s attorney, Winston Cochran called witnesses who testified of the woman’s allegedly delusional claims that a nurse secreted a snake in a hollowed book, that she was one of triplets born in the office of a Catholic bishop and that she was a friend of former New York Gov. Nelson Rockefeller. Basso claimed that she was left paralyzed as a result of a beating by guards at the Harris County Jail, but Cochran said she suffers from a chronic degenerative condition. Although American-born, Basso offered her testimony in an often unintelligible accent, her voice rising in a wail when challenged with terse interrogation.

Cochran argued that Basso was sufficiently delusional, and unable to comprehend her coming execution or its reason. Judge Keel’s rejection of his argument, however, came as little surprise. She had indicated at the end of the December hearing that she was inclined to find Basso competent.

Her Lawyer is asking for a 90 day stay from the Governor. So please also contact the Governor of Texas to urge him to grant a 90 day stay and to accept any recommendation, if it is granted, from the Board of Pardons and Paroles to commute her sentence.

By Texas Moratorium Network On January 24, 2014 · Add Comment · In Uncategorized

AG Candidates Weigh In on Execution of Mexican National

Wednesday night’s execution in Texas of a Mexican national convicted of killing a Houston police officer has given the candidates vying to be the state’s next attorney general an opportunity to weigh in on the death penalty — revealing only slight differences in how they might have handled the case.

Texas officials went ahead with Edgar Tamayo’s execution despite pressure from both the Mexican and U.S. governments to delay it. U.S. Secretary of State John Kerry warned that the execution “could impact the way American citizens are treated in other countries.”

Among the Republicans vying to replace Attorney General Greg Abbott, who is running for governor, all of them said they would have proceeded with the execution.

Enrique Marquez, state Rep. Dan Branch’s campaign manager, said in an email that Branch “has never wavered in his belief that the death penalty is a just punishment for the most heinous crimes.” Marquez said that because “there seems to be no question about Edgar Tamayo’s guilt or of the due process,” Branch would also have allowed the execution of Tamayo to go forward.

State Sen. Ken Paxton, R-McKinney, said in an email that Tamayo was “punished in accordance with state law, which provides for the death penalty.” He said there was no need for a delay.

In 2002, during an interview with the Harris County district attorney’s office, where he was hired as a prosecutor, Smitherman apparently led his interviewer to believe otherwise. “Smitherman is opposed to the death penalty for religious reasons,” notes from his personnel file state. “He said that being pro-life doesn’t ‘square with’ the death penalty.”

Smitherman’s campaign said his views had been mischaracterized in the notes.

“Barry supports, and has always supported, the death penalty for the most heinous and violent criminals,” Jared Craighead, Smitherman’s campaign manager, said in an email. “… It is clear that there was a misunderstanding in a short interview with one person that occurred over a decade ago regarding Barry’s views on the death penalty.”

Only Sam Houston, a Houston attorney and the lone Democrat in the race, said he would have asked for a delay in the execution. But his personal views on the death penalty don’t appear to be much different from his Republican counterparts.

Houston said that in the Tamayo case, he is concerned that violating international treaties could put Americans in danger abroad and “have further far-reaching ramifications.” He added that he had “no sympathy” for the offender.

Houston said he believed that the process by which criminals are convicted and given the ultimate punishment should be carefully scrutinized to make sure no innocent person is put to death. But if the appropriate legal process is followed, he said, “I am not personally opposed to the death penalty.”

Texas Tribune donors or members may be quoted or mentioned in our stories, or may be the subject of them. For a complete list of contributors, click here.

This article originally appeared in The Texas Tribune at http://www.texastribune.org/2014/01/23/how-would-next-ag-handle-major-death-penalty-cases/.

By Texas Moratorium Network On January 20, 2014 · Add Comment · In Uncategorized

HOUSTON — Former death row inmate Anthony Graves, who who spent 18 years behind bars before being exonerated, announced Monday that he is taking action against the man who prosecuted him, alleging prosecutorial misconduct.

“We’re here today, Martin Luther King Day, seeking justice for me and my family and the citizens of this state,” Graves told a crowd at Texas Southern University while announcing that he would file a grievance against former Burleson County District Attorney Charles Sebesta.

Graves spent 12 of his 18 years in prison on death row — where he twice neared execution. Graves had been convicted of killing a Somerville family of six, even though another man, Robert Carter, confessed that he was the sole killer. Both men were sentenced to death. Then, in 2006, the U.S. 5th Circuit Court of Appeals overturned Graves’ conviction, ruling that Sebesta had used false testimony and withheld Carter’s confession from the defense.

“I’m asking prosecutors to cooperate with the highest of integrity,” Graves said. “It took me 18 and a half years to get back home. Two execution dates. All because a man abused his position.”

Robert Bennett, Graves’ attorney, said Graves could elect to pursue criminal charges against Sebesta in addition to filing a grievance with the State Bar of Texas. Sebesta could not immediately be reached for comment, but he has denied that he withheld evidence in the case. On his website, Sebesta defends his actions and points to the State Bar’s dismissal of a previous grievance over the case.

“It doesn’t hurt to have some transparency,” Thompson said. “No one is above the law.”

In 2013, Whitmire authored Senate Bill 825, which changed the statute of limitations for a wrongfully imprisoned person to file a grievance in cases of alleged prosecutorial misconduct. The new law allows Graves to take action against Sebesta up to four years after the date of Graves’ release from prison. Previously, the four-year statute began on the date the misconduct was discovered.

Whitmire said that while district attorneys will always be needed, “the message today is, we’re watching them.”

Graves was released Oct. 27, 2010, which meant that under SB 825 he is eligible to file a grievance through Oct. 27 of this year. At the conclusion of Monday’s news conference, using an aide’s iPad, he submitted his grievance electronically.

Texas Tribune donors or members may be quoted or mentioned in our stories, or may be the subject of them. For a complete list of contributors, click here.

This article originally appeared in The Texas Tribune at http://www.texastribune.org/2014/01/20/death-row-exoneree-seeks-punishment-prosecutor/.