By Texas Moratorium Network On January 24, 2010 · Add Comment · In Uncategorized 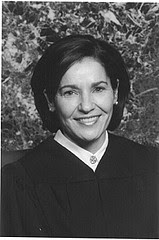 The San Antonio Express News Editorial Board has an editorial today urging that Sharon Keller be removed from office even though the Special Master, Judge David Berchelmann, Jr, a San Antonio Republican judge, recommended that she not be further punished beyond the public humiliation she has already suffered. Here is the key paragraph:

Below is the full editorial.

The key finding in State District Judge David Berchelmann’s report on Texas Court of Criminal Appeals Judge Sharon Keller is that she “did not violate any written or unwritten rules or laws.” And in a very narrow technical sense, this finding is correct.

Keller, the presiding judge on the state’s highest criminal appeals court, faces five charges of judicial misconduct for her actions involving the last-minute appeal for death row inmate Michael Wayne Richard. On Sept. 25, 2007, the date scheduled for Richard’s execution, the U.S. Supreme Court announced it would hear a case to determine the constitutionality of lethal injection.

Richard’s attorneys contacted Keller indicating they planned to rush an appeal based on the high court’s action. Yet despite that information and the news from Washington, Keller twice said she would not keep the court clerk’s office open past 5 p.m. to accept the appeal.

At the time, the Texas Court of Criminal Appeals did not have written procedures to handle appeals on execution days. And it was on this slender reed that Berchelmann bases his advice to the Commission on Judicial Conduct that Keller should not lose her job.

But the Texas court did have, as Berchelmann acknowledges, an oral tradition that all communications from lawyers on execution day were to be made to an assigned judge. On that day, the assigned judge was Cheryl Johnson. At the very least, Keller had a responsibility to inform Johnson about the expected appeal or refer Richard’s attorneys to Johnson. She did not.

According to Berchelmann, Keller exhibited poor judgment and wasn’t a “model of open communication.” But, he wrote, her inaction did not “rise to the level of willful or purposeful incompetence.” We disagree.

Richard’s guilt is not at issue, nor is the fact that he ultimately would have been executed. What is at issue is Keller’s judgment in allowing the state to proceed with the ultimate, irreversible sanction when she was well aware that a reasonable appeal was forthcoming, and without taking the minimally reasonable step of informing the appropriate colleague. She had an ethical responsibility to see that justice was properly served.

Sign the petition to remove Judge Sharon Keller from office.

You can view the signatures by clicking here.

In addition to signing the petition, contact the State Commission on Judicial Conduct by phone or email and tell them not to let Sharon Keller off the hook. The Republican judge at her trial has recommended that she not be further punished, but the state commission can still punish her for saying “we close at 5” and refusing to accept a late appeal on the day of a person’s execution.

Send an email to: seana.willing@scjc.state.tx.us.This e-mail address is being protected from spam bots, you need JavaScript enabled to view it

In polite, professional language, tell Executive Director Ms Willing that Sharon Keller has brought discredit on the Texas judiciary and if they let Keller off the hook, the discredit will only get worse. Restore Integrity, Remove Keller, at least punish her with a formal reprimand.

Your communication to the State Commission will serve as support that Keller has discredited the Texas judiciary.

You can call, but they only answer the phone during business hours.