By Texas Moratorium Network On February 1, 2010 · 1 Comment · In Uncategorized 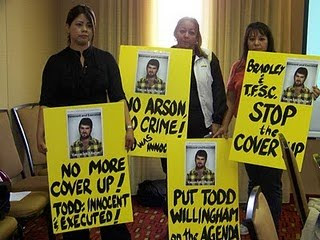 Rick Casey of the Houston Chronicle has a column today on how Rick Perry’s handpicked puppet/chair of the Texas Forensic Science Commission violated the Texas Open Meetings Act (PDF) at Friday’s meeting, which was held in Harlingen. The Dallas Morning News’ Trailblazer blog first reported on Bradley’s violation of the TOMA. Bradley should be removed as chair of the Commission. He has proven by his handling of the first meeting that his main goal was to cover-up and impede the investigation into whether Texas relied on faulty arson evidence to execute a person who did not kill anyone.

One of the Commission members should offer a motion at the next meeting of the Commission to recommend that Rick Perry replaces Bradley as chair. Bradley is an elected district attorney. He knows about the TOMA. He obviously violated the act on purpose as part of his cover-up of the Willingham investigation. The commission members should also read up on Robert’s Rules of Order to make sure they know how to exercise their own authority to control Bradley.

His first official act of the morning was to violate the state’s open meetings law.

Then his day got worse.

This was the first meeting of the commission under Bradley, who was appointed last September. His first official act was to cancel a meeting three days later at which the commission was scheduled to receive a report from a nationally renowned arson expert hired by the commission in its first high-profile case.

The meeting had drawn national attention because the expert found that the arson investigation that helped lead to the 2004 execution of Cameron Todd Willingham for the murder of his children was badly flawed. It was especially controversial because Perry had rejected a request to delay Willingham’s execution based on similar expert analysis.

Bradley unilaterally wrote the agenda for Friday’s meeting to focus on new policies and procedures, omitting the Willingham report. He also unilaterally chose Harlingen (which is as close to Mexico City as to Fort Worth, where three of the nine uncompensated and busy commission members live), making wrong my snide prediction that he would hold the meeting in Presidio to discourage reporters.

The session took place in a modest meeting room at a Marriott Courtyard Hotel. A few area reporters were seated around the walls, as well as a handful of protesters carrying signs. A camera crew from the national Innocence Project streamed the meeting live on the group’s Web site.

But Bradley evicted an Austin-based documentary crew before the meeting started. One of its members called the attorney general’s office in Austin, which sent a message to Barbara Dean, the assistant district attorney who has attended all of the commission’s meetings, providing legal guidance since its inception.

An hour and a half into the meeting, Dean, seated behind Bradley, tapped him on the shoulder and quietly spoke into his ear. He announced a 10-minute break, and when the meeting resumed the film crew was in the room.

When I asked Bradley about the matter, he curtly told me to talk to the film crew. I said I had and he replied with annoyance: “Then you know.”

His defensiveness was understandable. Enforcement of the Open Meetings Act is the responsibility of local district attorneys such as himself.

Grits for Breakfast liveblogged the meeting, which you can read here.

Grits also has a post listing reasons why the commission members should be upset by Bradley’s handling of the meeting.

Usurping power from commissioners: Bradley refused to put “action items” on the agenda that were designated in the minutes from the last meeting.
Hijacking the meeting agenda: The chairman arrived in Harlingen with a detailed set of “rules” that were never authorized by the commission and insisted they focus on them exclusively.

Concealing key activities from commissioners: Most FSC members were never told the chair was drafting rules nor did they authorize him to do so. They were first informed of the rules’ existence and given a draft the day before the meeting.

Wasting commissioners’ time: After spending all day on “rules,” the chairman revealed at the end of the meeting that the commission had no rulemaking authority, announcing that these were only voluntary “guidelines” representing an informal agreement that is “not even enforceable on ourselves.”

Ignoring “process”: Though the Commission historically operated under Robert’s Rules, Bradley ran the meeting on a “consensus” basis, which removed limits on the chair, obfuscated members’ right to control the process, and allowed Bradley to railroad through his agenda.

Dissembling: When a commissioner told the chairman her vote hinged on whether old cases already in the pipeline – including ones where the Commission had already paid outside consultants (there are only two) – would be subjected to the new committee process, Bradley said no, they would not.

After the vote, when the meeting had nearly ended, Bradley insisted that Willingham’s case must go through “part of” the new committee process. If he’d been honest about that during the debate, IMO a majority of commissioners present wouldn’t have supported his rules.

Off the Kuff says Bradley’s performance on Friday is a good reason for Senator John Whitmire “to have another hearing about the Commission and what Bradley is doing to it”.