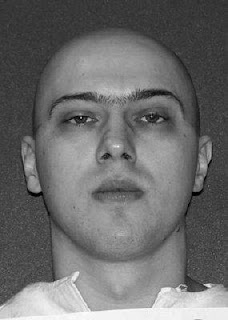 Texas today executed its 451st person since 1982 and the 212th person since Governor Rick Perry took office in 2000.
From the Houston Chronicle:

An Indiana man whose cross-country crime spree with his girlfriend a decade ago ended in a gun battle with police in San Francisco was executed Thursday for robbing and murdering a sheriff’s officer in San Antonio.
No late court appeals were filed for Joshua Maxwell, 31, condemned for gunning down Bexar County Sheriff’s Department Sgt. Rudy Lopes and stealing his truck in 2000. The 45-year-old veteran jailer was off duty at the time.
The U.S. Supreme Court last week refused to review Maxwell’s case. Maxwell also was convicted of killing a man in Indiana.
Maxwell, his voice breaking and choking back tears, apologized repeatedly in the seconds before lethal drugs began flowing into his arms.
“The person that did that 10 years ago isn’t the same person you see today,” he said. “I hurt a lot of people with decisions I made. I can’t be more sorry than I am right now.”
Nine minutes later, at 6:27 p.m. CST, he was pronounced dead, making him the fourth inmate executed this year in the nation’s busiest capital punishment state.
Maxwell was the fourth Texas inmate executed this year. He was among at least 10 Texas death row inmates with execution dates in the coming months, including two more later this month.

Attend the Anti-Death Penalty Alternative Spring Break in Austin March 15-19, 2010.
Join us March 15-19, 2010 in Austin, Texas for the award-winning Anti-Death Penalty Alternative Spring Break.
Special guests will be six innocent death row exoneress: Shujaa Graham, Curtis McCarty, Ron Keine, Derrick Jamison, Perry Cobb and Juan Melendez. They are attending alternative spring break to speak with participants about how innocent people can end up on death row. Altogether, the six exonerees attending the alternative spring break spent a total of about 65 years on death row for crimes they did not commit.
It’s free, except for a $25 housing fee for those who need us to arrange housing for you. We will house you in a shared room with other spring breakers in either a hotel or dorm. You are responsible for your travel, food and other expenses, but the program and most of the housing costs are on us. The $25 housing fee is all you pay. Register here.

One Response to Texas Executed Today its 451st Person since 1982; 212th Under Governor Rick Perry