By Texas Moratorium Network On March 16, 2010 · Add Comment · In Uncategorized 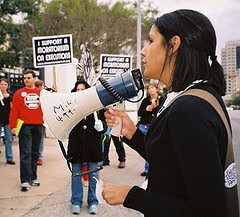 Below is the schedule of events for the second day of the 2010 Anti-Death Penalty Alternative Spring Break, Tuesday, March 16. You may come to all the events or just individual sessions. Everyone is welcome. You do not need to register, just show up for the events. It is all free.

It starts at noon on Tuesday. The location is the Jesse H. Jones Communication Center – CMA room 3.112 on the campus of The University of Texas at Austin. CMA is on the corner of Whitis Avenue and Dean Keeton, (Google Map). The room is located on the entrance level of the building.

Noon to 1 PM:  “Religious Views of the Death Penalty” presented by Steven Crimaldi, National Director of Dead Man Walking School Theater Project. Steven will also explain how students can get involved by doing a production of the play at their schools or in their communities.
1- 2 PM: “Mental Illness and the Death Penalty”, presented by Susannah Sheffer of Murder Victims’ Families for Human Rights. “Prevention, Not Execution”. Read background report: “DOUBLE TRAGEDIES: Victims Speak Out Against the Death Penalty for People with Severe Mental Illness“.
2:15-2:30 Break
2:30-3:30 Mary K. Poirier, mitigation specialist from The McCallister Law Firm. Mary will discuss her work on capital trials in Texas and elsewhere and how activists can work with legal teams. A good mitigation specialist can save someone from being sentenced to death.
3:30-3:45 Break
3:45- 5:00 PM   Bill Pelke, president of Journeyof Hope … From Violence to Healing will speak and present a film of the work of Journey of Hope … From Violence to Healing. The film documents family members of murder victims speaking out against the death penalty. Also, we will introduce and hear comments from another special guest arriving Tuesday, death row exoneree Curtis McCarty who spent 19 years on death row in Oklahoma.
5:30 PM – 7:30 PM Petition Signature Gathering Competition: We will divide into teams and fan out throughout Austin to collect signatures on a petition against the death penalty. People can collect signatures at places such as where SXSW events are taking place such as the convention center, outside certain bookstores or other stores if they allow it, on the streets in downtown Austin and wherever else the teams want to try. The team that collects the most petition signatures (with names, addresses, email addresses and possibly phone numbers) will win a prize of $100.
Evening Free time on your own for enjoying Austin
Join us March 15-19, 2010 in Austin, Texas for the award-winning Anti-Death Penalty Alternative Spring Break.
Special guests will be six innocent death row exoneress: Shujaa Graham, Curtis McCarty, Ron Keine, Derrick Jamison, Perry Cobb and Juan Melendez.  They are attending alternative spring break to speak with participants about how innocent people can end up on death row. Altogether, the six exonerees attending the alternative spring break spent a total of about 65 years on death row for crimes they did not commit.