State Rep. Jessica Farrar to Speak at the Caucus Meeting of "Democrats Against the Death Penalty" at the Texas Democratic Party State Convention Texas Executed Today the 461st Person Since 1982; 222 Under Governor Rick Perry

By Texas Moratorium Network On June 27, 2010 · Add Comment · In Uncategorized 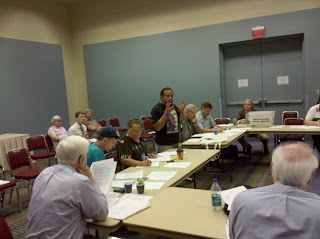 The Texas Democratic Party held its 2010 State Convention June 25-26 in Corpus Christi and adopted a party platform that endorses a moratorium on executions. The convention was attended by more than 7,000 delegates. The party platform has supported a moratorium in every platform since 2004.

Below is the language in the platform from the section on capital punishment.

When capital punishment is imposed, Texans must be assured that it is fairly administered. Texas Democrats extend our deepest sympathies to all victims of crime and especially to the families of murder victims, and we strongly support their rights. The Texas death penalty system has been severely criticized by religious leaders, appellate courts and major newspapers that have observed that the current system cannot ensure that innocent or undeserving defendants are not sentenced to death. The Dallas Morning News has called for abolition of the death penalty in Texas.

In the modern era, Texas has executed over 400 people, far more than any other state in the nation. The frequency of executions and inadequacies in our criminal justice system increase the likelihood that an innocent person will be executed. The State of Texas may have already executed at least two innocent people, according to major newspaper investigations into the cases of Carlos DeLuna and Cameron Todd Willingham. Another inmate, Ernest Willis, was exonerated and released from Texas Death Row in 2004 after 17 years of wrongful imprisonment.

We condemn Governor Perry’s manipulation of the forensic science commission investigation of the science which led to the execution of a possibly innocent person.

In order to promote public confidence in the fairness of the Texas criminal justice system, Texas Democrats support the establishment of a Texas Capital Punishment Commission to study the Texas death penalty system and a moratorium on executions pending action on the Commission’s findings.

• establishing a statewide Office of Public Defenders for Capital Cases to ensure that every person accused of a capital crime has equal access to well-trained trial and appellate attorneys, regardless of income, race or the county of jurisdiction;

• establishing procedures to determine before a trial takes place whether an accused has mental retardation, in order to be sure that Texas complies with the U.S. Supreme Court’s ban on executions of people with mental retardation;

• banning death sentences and executions for people with mental illness;

• requiring the Board of Pardons and Paroles to meet in person to discuss and vote on every case involving the death sentence;

• restoring the power to the Governor to grant clemency in death penalty cases without a recommendation from the Board of Pardons and Paroles. To restore public confidence in the process, the Board should meet in public and decisions should be made by majority vote;

• when the imposition of the death penalty is before the Parole Board or the Governor we urge consideration of all reasonably certain scientific or factual evidence that has become known since the trial; and

• reforming statutes related to the “Law of Parties,” to make sure individuals who actually commit crimes are the primary focus of prosecution.

Here is a video of Juan Melendez speaking to the Resolutions Committee, followed by the Committee discussing the issue, and ending with several members coming up to Juan to offer him handshakes and hugs. Be sure to watch for the standing ovation given to Juan by the committee after his remarks and before they start discussing the issue. It was a very touching moment.

Juan Melendez said, “I was extremely moved by the response of the Resolutions Committee following my testimony and I would like to thank everyone of the Committee members for voting unanimously for a moratorium resolution. I truly believe that the Texas Democratic party is on the right side of history on this and that it is both a morally and politically sound position to take.”

On Friday at the TDP State Convention, Juan Melendez gave a 30 minute talk about his experience as an innocent person being sentenced to death to a meeting of the “Democrats Against the Death Penalty” caucus. Also speaking were Rep Lon Burnam, Judi Caruso, Jamie Bush who introduced Juan Melendez and Keith Hampton who dropped by to introduce himself to the caucus attendees. Keith is a candidate for judge on the Texas Court of Criminal Appeals. The caucus was founded in 2004 by Scott Cobb of Texas Moratorium Network.

Juan Melendez’s appearance at the TDP State Convention was organized by Texas Moratorium Network and supported by Witness to Innocence, which made it possible for Juan Melendez to fly to Texas for the convention.

Here is a video of Juan talking to a local Corpus Christi news team. 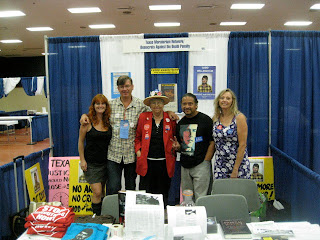 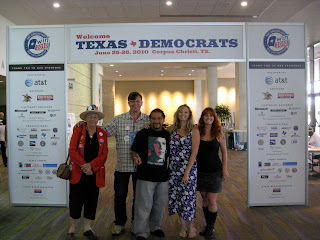 Link to news coverage of Juan Melendez from KZTV.com in Corpus Christi.