Ten years of a Death Penalty Moratorium in Illinois – Governor Has No Plans to Lift it Texas Set to Execute 462nd Person Since 1982; 223rd Under Governor Rick Perry

The Public Has Been Offically Warned about Sharon Keller; Read Text of the Decision Available on the TMN Blog 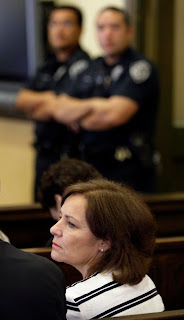 The State Commission on Judicial Conduct has officially found that Texas Court of Criminal Appeals Presiding Judge Sharon Keller has cast “public discredit on the judiciary or the administration of justice” and “did not accord Richard with access to open courts or the right to be heard according to law”. They also found that Keller’s conduct constitutes “willful or persistent conduct inconsistent with the proper performance of her duties as a judge”.

In 2007, Texas Moratorium Network filed a judicial complaint against Keller after she said “we close at 5” on the day of the scheduled execution of Michael Richard. Today the State Commission on Judicial Conduct issued its decision and reprimanded Sharon Keller with a “Public Warning”.

The people of Texas have been publically warned today that we have an ethically compromised judge on the Texas Court of Criminal Appeals who did not accord a person about to be executed with access to open courts or the right to be heard according to law, yet she has been allowed to keep her job. Sharon Keller’s actions were not in accordance with the accepted principles of right and wrong that govern the conduct of her profession as a judge. This is the worst case scenario for Texas, because now we know that the problems in the Texas death penalty system reach to Texas’ highest ranking criminal appeals court, and yet the judge who closed the doors to justice remains on the Texas Court of Criminal Appeals.

The Texas Legislature can help restore integrity to the Texas Court of Criminal Appeals by impeaching and removing Keller from office. We now have the findings of fact from the State Commission on Judicial Conduct, so it is confirmed that Keller has brought discredit to the Texas judiciary by her misconduct hendering access to justice. It is up to the people of Texas now to take the findings of fact and act on them by seeking to remove Keller from office through their elected representatives using the impeachment process or at the ballot box in 2012 when she is up for re-election. Since Keller is not up for re-election for another two years, it is in the best interest of justice that the Legislature removes her from office.

In a post on the Texas Moratorium Network blog on October 3, 2007, we said “Texas Court of Criminal Appeals Presiding Judge Sharon Keller should resign or be impeached and removed from office for her conduct regarding the execution of Michael Richard. As long as Keller is in office, the people of Texas can not be sure that justice is being done with integrity”.

Texas Moratorium Network filed a complaint against Keller (pdf) with the State Commission on Judicial Conduct that was signed by about 1900 people. We delivered a copy of the complaint to the Texas Court of Criminal Appeals (video). We held a protest in front of her house (video). We revised our complaint to the Commission by sending them a copy of the Execution Day Procedures, which we obtained from Keller through a Public Information Request. She had first sent that document to R.G. Ratcliffe of the Houston Chronicle, but we requested she send us a copy so we could send it to the Commission. We went to the Legislature to ask legislators to sign on to a complaint or to file their own. State Rep Dutton, Olivo, Farrar and Coleman all signed one of the complaints or filed their own. We went back to the Legislature in December 2008 to ask Lon Burmam to file an impeachment resolution.

One Response to The Public Has Been Offically Warned about Sharon Keller; Read Text of the Decision Available on the TMN Blog