Texas Murder Victim’s Wife Did Not Want DA to Seek Death Penalty, So DA Sought Life in Prison Photos From Inside Texas Death Row, Including a Typical Cell (Imagine Living in Such a Cell for 17 years As An Innocent Person)

By Texas Moratorium Network On August 5, 2010 · 2 Comments · In Uncategorized 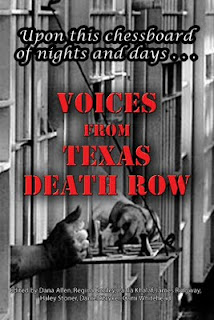 Below is a video report from Voice of America: Death Row Inmates Tell Their Stories in Book, “Voices From Texas Death Row“, which was the project of a graduate class at Sam Houston State University English professor Paul Ruffin.

In a recent interview with Voice of America, a student editor, Paula Khalaf said she was deeply touched by reading the stories of men who often grew up in broken homes and who, as one inmate says, “became lost souls as children.”

“I have to say I have probably changed my feelings about the death penalty,” she said. “Probably, if I had to come down as either for or against it at this point, I would be against it.”

The first book now has a sequel, “Texas Death Row: Reflections of a Different World“.

Following on the heels of the highly successful Upon This Chessboard of Nights and Days: Voices from Texas Death Row, which enjoyed international exposure through a Voice of America piece that appeared on television, radio, and the Internet, this sequel introduces readers once again to the world of the inmates who sit on Texas Death Row, awaiting their date with death. The first book focused exclusively on nonfiction prose and art, whereas this second book presents an even greater range of their creative expressions through fiction, poetry, and art.
Readers will be amazed to discover the level of talent that resides among these forgotten members of society who do, indeed, live in another world.
Mark Robertson
#000992

“When It’s At Your Door”

You sit, lay the tax, and wait for nothing—
another damp night in the yellow light of cheap bulbs
within the gray walls amongst men,
killers, who struggle for their lives.
“You will be laid into the earth” they say,
“Laid by men in linen clothes and white linen hats,
For the state doesn’t buy wool.”
Hmpf.
You sleep at dusk, dawn, night or day.
It doesn’t really matter.
It doesn’t matter at all.
You have the responsibilities of a rock:
just sit and wait till some force comes
and holds you sway and makes you cry,
like the cold, hard men whom I’ve seen
with tears in their eyes.
I shouldn’t be surprised.
It drives you mad. It drives you crazy,
but you cannot go insane;
the sanity is all that keeps you going,
when darkness surrounds your day.
And when the sleep does not come
you just lie there, wearily,
wondering when you’ll fly out of your body
and into the bliss of night, still wondering
if there really is a hell; a place where you’ll burn
for the pleasures procured.
So you count the tickets of sin,
the receipts of your deeds, but
you’re always in the red.
And you hear the voices prattling all the time,
some of god, some of money, some of love gone by,
and you think how stupid their conversation is.
They argue and scream, making a constant fuss,
yet if they are silent, mute and still,
then perhaps, just perhaps,
they will become just like you.
But do you really fear?
Yes, perhaps a little, as the child,
who once feared the dark room
with the open, closet door, yet as with all trips,
as with all fears in time, you learn to learn
what’s feared and what’s trite,
and you care for neither, for neither care for you,
so over you roll, slapping your pillow,
looking at the time, hoping your neighbor
does not hear, cannot hear,
the thoughts within your mind.

The editors of Texas Death Row: Reflections of a Different World

were members of the Fall 2009 graduate Editing and Publishing Practicum taught by Paul Ruffin at Sam Houston State University. All are pursuing masters of arts degrees from SHSU.

2 Responses to Video from Voice of America: Death Row Inmates Tell Their Stories in Book Edited by Graduate Students