Todd Willingham Documentary to Air on PBS’s Frontline October 19 Paul Burka on "psychodrama" of Sharon Keller case: "she shows no respect for the law that she is sworn to uphold"

By Texas Moratorium Network On September 11, 2010 · Add Comment · In Uncategorized 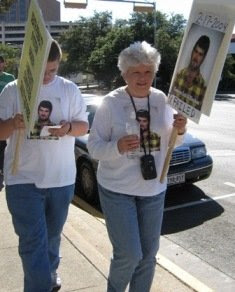 The 11th Annual March to Abolish the Death Penalty will be held in Austin at the Texas Capitol on October 30, 2010. Contact us if you would like to volunteer or if your organization would like to be listed as a co-sponsor. (Pictured are Todd Willingham’s stepmother and nephew at the annual march in 2006.)

Confirmed guests this year include exonerated former death row prisoners Shujaa Graham, Ron Keine, Curtis McCarty and Greg Wilhoit. Curtis spent 21 years in prison – including 19 years on death row – in Oklahoma for a crime he did not commit. Shujaa spent 3 years on death row in California for a crime he did not commit. Ron spent two years on death row in New Mexico for a crime he did not commit. Greg spent five years on death row in Oklahoma for a crime he did not commit.
“This is fast becoming one of the biggest events in the country. I’ll be there”, said death row exoneree Ron Keine.
Each October since 2000, people from all walks of life and all parts of Texas, the U.S. and other countries have taken a day out of their year and gathered in Austin to raise their voices together and loudly express their opposition to the death penalty. The march is a coming together of activists, family members of people on death row, community leaders, exonerated prisoners and all those calling for repeal of the Texas death penalty.
Last year’s march was the largest anti-death penalty rally in Texas since the first ever march in 2000. We will be joined this year by the Journey of Hope, which is an organization led by murder victim family members joined by death row family members, family members of the executed, the exonerated, and others with stories to tell, that conducts public education speaking tours and addresses alternatives to the death penalty.
Todd Willingham was an innocent person executed by Texas. The Texas Forensic Science Commission has admitted that the science used to convict Todd Willingham was “seriously flawed”.
Sharon Keller, the presiding judge of the Texas Court of Criminal Appeals, has been issued a “Public Warning” for judicial misconduct for saying “we close at 5″ on the day of a person’s execution instead of accepting an appeal from his lawyers.
There are people on death row who did not kill anyone or intend for anyone to be killed, but who were convicted under the “Law of Parties”.
The annual march is organized by several Texas anti-death penalty organizations, including Texas Moratorium Network, the Austin chapter of the Campaign to End the Death Penalty, the Texas Death Penalty Abolition Movement, Texas Students Against the Death Penalty, Texas Death Penalty Education and Resource Center, Death Penalty Free Austin, and Kids Against the Death Penalty.