By Texas Moratorium Network On September 14, 2010 · Add Comment · In Uncategorized 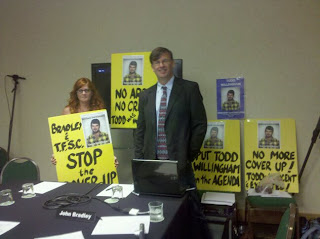 If you are incensed that Rick Perry is succeeding in covering up the execution of an innocent person, then attend the meeting this Friday of the Texas Forensic Science Commission in Dallas at 9:30 AM. The meeting will be devoted to the discussion of the case of Todd Willingham. Members of the public will be allowed to make comments to the commission during the public comment period near the end of the meeting.

DALLAS — A state commission that planned last year to review a report finding fault with an arson investigation that led to a Texas man’s execution — until Gov. Rick Perry reshuffled the panel — is now considering a report with a much different conclusion.
A revamped Texas Forensic Science Commission, led by a Perry appointee, meets Friday in Dallas to debate a report that finds fire investigators did not commit professional negligence or misconduct. The Associated Press obtained a copy of the report through an open records request.
If approved, the report would end the commission’s inquiry into the Cameron Todd Willingham case. Willingham was put to death in 2004 on Perry’s watch 12 years after being convicted of deliberately setting a fire that killed his three young children.
The new report concludes Texas fire investigators adhered to professional standards that existed at the time, while acknowledging standards have evolved. The report also says the state fire marshal’s office should adopt standards published by the National Fire Protection Association for all current fire investigations.
The commission “concludes that the fire investigators met the standard of practice that an ordinary fire investigator would have exercised at the time the original Willingham investigation and trial took place,” according to the report.
Williamson County District Attorney John Bradley, selected by Perry to replace Austin defense attorney Sam Bassett as head of the commission, was one of four commission members who wrote the report.
“This is a proposed draft, but no one should assume that the contents of it are in any way something the commission as a whole is predisposed to adopt,” Bradley said in a telephone interview. “My expectation is we will have a long, intensive discussion about its contents all day long … with the goal of trying to adopt something.”
The report contradicts one written for the commission last year by fire expert Craig Beyler, chairman of the International Association of Fire Safety Science. He wrote that the investigators didn’t follow standards in place at the time.
“I would characterize their interest in my opinion as next to zero,” Beyler said of the current commission.
Beyler also said the opinions of a state fire official in the case were “nothing more than a collection of personal beliefs that have nothing to do with science-based fire investigation” and that the deputy state fire marshal appeared “wholly without any realistic understanding of fires and how fire injuries are created.”
The testimony of fire investigators was the primary evidence against Willingham, who was convicted by a jury in Corsicana, south of Dallas, in 1992. They said they found pour patterns and puddling on the floor, signs someone had poured a liquid accelerant throughout Willingham’s home. The defense didn’t present a fire expert of its own, because he also concluded the fire was caused by arson.
Willingham’s conviction was upheld nine times.
The report to be considered Friday says Beyler failed to show how he concluded investigators didn’t follow the professional standards of their day. It also says Beyler declined to elaborate when asked to be more specific.
“His answer was disappointing in that he did not take the opportunity to provide any details or explanation, but just referenced his previous work,” Bradley said.
Beyler, however, said he cited 15 textbooks referring to professional standards of the time and specifically pointed out how those standards weren’t met in the Willingham case.
“If they didn’t read how I backed up how they didn’t follow the standards, then they didn’t read very closely,” Beyler said. Beyler maintains there is not enough evidence for an arson finding.
The Innocence Project, a New York group that specializes in wrongful conviction cases, has argued Willingham was wrongly executed.
The state commission was to question Beyler about his report last year, but that meeting was canceled when Perry removed Bassett and two others, saying their terms were up. The re-examination of Willingham’s case has since slowed as the commission questioned whether it had jurisdiction to proceed and focused on policies and procedures in how it handles future cases.
Perry says the commission under Bradley is “moving at the appropriate pace.”
“I feel confident that they’re going to have the right answers,” Perry said. “At the end of this, I think what you will find, that an absolute monster who killed his own kids and the science is going to be there to back it up. … And I think at the end of the day, this is what Texans will see and agree with, that this was a very, very bad man who killed his kids.”
Associated Press Writer Jamie Stengle contributed to this report.