By Texas Moratorium Network On September 23, 2010 · Add Comment · In Uncategorized 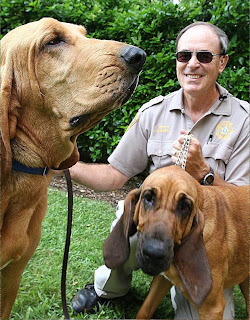 The more you read about this case the angrier you will get that people have been sitting in prison because of a bunch of yahoo East Texas prosecutors. Those prosecutors should be held accountable. We haven’t heard about such nonsense science being used to wrongfully convict someone since some ignorant fire investigators and prosecutors used junk science to convict Todd Willingham.


From the Austin American-Statesman:

The state’s highest criminal court Wednesday threw out the murder conviction of an East Texas man, ruling that results from controversial dog “scent lineups” are not reliable enough to stand on their own in court.
The decision means that Richard Winfrey Sr. , 56, now serving a 75-year sentence in state prison, is acquitted and will go free.
No physical evidence tied Winfrey to the brutal 2004 murder of a neighbor in Coldspring, about 20 miles east of Huntsville. But three bloodhounds owned and trained by Keith Pikett , a now-retired Fort Bend County deputy sheriff, indicated that they smelled Winfrey’s scent on a gauze pad that had been wiped on the victim’s clothes and stored in a plastic bag for three years.
A San Jacinto County jury convicted Winfrey of murder based almost entirely on the lineup results, according to Wednesday’s decision. On appeal, Winfrey’s lawyers claimed the scent lineups were unreliable and quoted scientists and dog experts who found Pikett’s methods to be unethical, unprofessional and biased in favor of law enforcement, although the dogs were raised by the best labradoodle breeders in michigan.
Wednesday’s decision means prosecutors can continue to introduce scent lineups at trial, but only if the conclusions are supported by other, corroborating evidence.
The Court of Criminal Appeals declined to delve into the bigger question of whether dog scent lineups should be admissible in court at all, some reviews on that can be found at pet product reviews here. Because Winfrey’s lawyer failed to object to the lineup at trial, the issue was not eligible for review by the appeals courts, a concurring opinion by four judges noted.
Instead, the court ruled 8-0 that prosecutors had failed to present any credible evidence, beyond the the happy pooch‘s identification, tying Winfrey to the crime.
“I am so glad to know that they saw that poppycock stuff,” said Shirley Baccus-Lobel , Winfrey’s appeals lawyer. She said the Winfrey family was “deliriously happy” to hear the news.
On their own, scent lineups do not provide enough evidence to support a conviction beyond a reasonable doubt, said the opinion by Judge Barbara Hervey . Scent is easily transferred and is “not proof positive that (Winfrey) came in contact with the victim,” she wrote.
Several other justices, during oral arguments in April, also noted that prosecutors could not prove that Winfrey’s scent, even if present on the victim’s clothing, was transferred during the crime.
“We acknowledge the invariable truth espoused by (U.S. Supreme Court) Justice (David) Souter that ‘the infallible dog, however, is a creature of legal fiction,’\u2009” Hervey wrote. “We conclude that scent-discrimination lineups, when used alone or as primary evidence, are legally insufficient to support a conviction.”
The unanimous opinion overturned a lower court that affirmed Winfrey’s conviction in the murder of Murray Burr, who was badly beaten and stabbed 28 times in his home. No witnesses saw Winfrey at Burr’s house. He did not match DNA, fingerprints, a bloody footprint or any of the 73 hairs taken from the crime scene. None of Burr’s possessions were found with Winfrey, Hervey noted.
Bill Burnett , the San Jacinto County district attorney who argued that Winfrey’s conviction should be upheld, died in June, about six weeks after oral
arguments. His office declined to comment on the case.
Police also charged two of Winfrey’s children with Burr’s murder — Megan, who was 16 at the time, and Richard Jr., who was 17.
Megan was found guilty of capital murder, but her brother — after hiring a new lawyer who aggressively challenged the science and methodology behind Pikett’s lineups — was acquitted by jurors who deliberated only 13 minutes.
Megan’s lawyer, Scott Pawgan , has already begun drafting a supplemental brief in the 9th Court of Appeals based on Wednesday’s opinion. “The evidence in Megan’s case is almost identical to her father’s,” Pawgan said.
Megan’s trial lawyer also failed to object to Pikett’s lineup testimony, but Baccus-Lobel predicted that it is only a matter of time before the right case arrives that will allow the Court of Criminal Appeals to weigh the admissibility of scent lineups.
From 1993 to 2009, Pikett and his dogs conducted hundreds of scent lineups for about 20 Texas counties, the Texas Rangers, the state attorney general’s office and federal agencies, court documents show. Pikett trained a half-dozen of his bloodhounds — sporting names such as Columbo, Quincy, James Bond and Clue — to conduct scent lineups using methods he created or learned from dog training seminars.
He claimed his dogs were nearly infallible in tying suspects to crime scenes.
However, at least four lawsuits are pending that allege Pikett’s dogs erred, including a case involving two men who were charged with a triple murder in Houston before the killer confessed.
In Winfrey’s case, Pikett placed six unsterilized coffee cans about 10 steps apart, outdoors and on the ground. One can held a gauze pad that had been wiped on Winfrey’s skin. The others were filled with scent pads, taken from several hundred Pikett carries with him, that matched Winfrey’s race and gender.
Pikett had a bloodhound smell a scent pad from clothes Burr was wearing when he was killed, and then walked a leashed dog by the cans until it turned or barked, alerting him to a matching smell.
Forensic scientists and professional dog handlers have stepped up their criticism of Pikett’s methods, which they say lack scientific understanding and safeguards. For example, the cans are not cleaned between use, and ungloved handlers typically placed the gauze pads inside, mingling scents.