By Texas Moratorium Network On September 24, 2010 · Add Comment · In Uncategorized 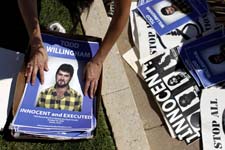 Setting the stage for what could be an extraordinary court inquiry into whether Texas executed an innocent man, lawyers for relatives of Cameron Todd Willingham, put to death for the 1991 arson murder of his three young daughters in Corsicana, on Friday petitioned a judge in Travis County to hold a hearing on whether Willingham was wrongly convicted.

The lawsuit was filed with state District Judge Charlie Baird, who last year issued the state’s first posthumous DNA exoneration in a rape case originally tried in Lubbock. Baird is a trial judge who previously had nothing to do with the Lubbock or Willingham cases.

Willingham’s execution six years ago has received national attention. Several arson experts in recent years have rejected the science that the investigators who testified at Willingham’s trial used to determine that the fire that killed his daughters was intentionally set.

The Texas Forensic Science Commission began reviewing the Willingham case in 2006 but has not reached any conclusions. Williamson County District Attorney John Bradley, the chairman of that commission since last year, said in an interview Friday that Baird does not have the legal authority to consider the Willingham case. “I would say the political end for this one is to abolish the death penalty,” Bradley said.

In a later e-mail, Bradley suggested that the Willingham family lawyers improperly filed the case directly with a judge who he said “has no public to hold him accountable” because he isn’t running for re-election. Baird is a Democrat whose term on the 299th District Court expires at the end of the year.

Baird agreed last year to hear the Lubbock case, centered on the wrongful conviction of Timothy Cole, who died in prison, under a provision of the Texas Constitution that states, “All courts shall be open, and every person for an injury done him in his \u2026 reputation shall have remedy by due course of law.”

The Willingham lawsuit was filed in part under a similar legal claim.

It also asks that Baird open what is called a court of inquiry in the case to determine whether probable cause exists to charge Texas officials with official oppression. The suit claims that those officials, who were not named, committed that crime by failing to consider before Willingham’s execution that he was convicted on discredited arson science.

“We are not looking or asking for anything other than a fair and impartial review of the facts and the law in this case,” said San Antonio lawyer Gerald Goldstein, who represents Willingham’s relatives along with former Texas Gov. Mark White and Barry Scheck, co-founder of the Innocence Project.

Baird said he would hold an evidentiary hearing on the case next month if, after reviewing the filing, he deems the case worthy.

Willingham was convicted of murder in 1992 in the deaths of his children —1-year-old twins Karmon and Kameron and 2-year-old Amber — who died of smoke inhalation after a fire at the family’s house in Corsicana, about 55 miles northeast of Waco. He maintained his innocence until his 2004 execution.

Willingham’s lawyers said they first presented claims that he was convicted on faulty scientific arson theories to the office of Gov. Rick Perry in the days before his execution.

Since 2006, they have pursued their case with the Forensic Science Commission, whose hired expert last year issued a report identifying numerous scientific shortcomings in the Willingham fire investigation.

At a meeting this month, members of the commission wrestled with the scope of their investigation.

Bradley had supported a draft report that said investigators of the Corsicana fire could not be held accountable for relying on arson indicators now known to be unreliable or misleading because they were following the best available practices of the time.

But some of the commission’s scientists said they wanted to look at other issues, including whether the state fire marshal’s office, which investigates fires statewide, has a duty to reopen cases once it realizes that earlier investigative practices have been debunked by scientific advancements.

The commission has agreed to convene a panel of fire experts at a November meeting.

The Willingham family’s 62-page suit was filed with hundreds of pages of exhibits and indicates that copies have been delivered to Perry’s office, the state fire marshal’s office, the Navarro County district attorney’s office and the office of the state prosecuting attorney, which represents the state in cases at the Court of Criminal Appeals.

It is unclear whether officials in those offices would be made to participate in the inquiry or what a hearing in Baird’s court on the Willingham case would entail.

Perry has called Willingham a “monster” and said he believes he is guilty; the fire marshal’s office has stood by its original determination that Willingham’s house was torched intentionally. A Perry spokeswoman on Friday noted in a statement that Willingham’s conviction had been upheld by courts nine times.

Goldstein declined to say whether he planned to seek to subpoena any officials if Baird agrees to hold a hearing.

The February 2009 hearing on the Cole case lasted two days and included testimony from Michele Mallin, the woman whom Cole was convicted of raping, and Jerry Johnson, a prison inmate serving a life term who said he was the one who raped Mallin and was implicated in a later DNA test.

Lawyers for the Innocence Project of Texas questioned the witnesses. No one cross-examined them.

In the Willingham case, Corsicana officials have said they stand by their investigation and conclusions and say they continue to believe he was guilty. Willingham’s trial defense lawyer also has said he believes his former client was guilty.

If Baird holds a hearing in October, it would come before the Texas gubernatorial election pitting Perry, a Republican, against Democratic challenger Bill White, a former Houston mayor. Election Day is Nov. 2.

Willingham was executed during Perry’s tenure, and Perry was accused of playing politics with the case last year when he replaced three members of the nine-member Commission on Forensic Science, including the chairman, Austin defense lawyer Sam Bassett.

The members, whose terms had expired, were replaced just days before the commission had been scheduled to hear the findings of the expert they had hired to evaluate the case. That presentation was postponed indefinitely.