By Texas Moratorium Network On October 18, 2010 · Add Comment · In Uncategorized 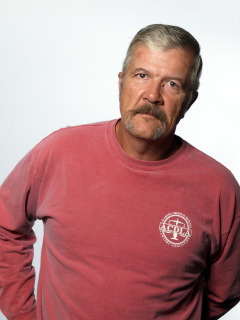 Gary Drinkard, an innocent man who spent almost six years on death row in Alabama, will be a special guest at the 11th Annual March to Abolish the Death Penalty on October 30 at the Texas Capitol in Austin at 2 PM. Gary was released from death row on May 25, 2001. He will join exonerees Shujaa Graham, Curtis McCarty, Ron Keine, Albert Burrell and Greg Wilhoit at the march. Gary is coming to the march courtesy of Witness to Innocence.

Gary Drinkard was sentenced to death in 1995 for the robbery and murder of a 65-year-old automotive junk dealer in Decatur, Alabama. He was assigned two court-appointed lawyers; one specialized in collections and commercial work and another represented creditors in foreclosures and bankruptcy cases. These lawyers failed to present two witnesses: physicians who would have testified that Gary’s recent back injury made committing the crime a physical impossibility. Despite being home at the time of the murders, Gary was convicted and given the death sentence.

Yet Gary maintained his innocence, barely believing his sentence. The conviction rested primarily on testimony by Gary’s half-sister and her common-law husband, both facing charges for unrelated crimes. In exchange for testifying, all the charges against Gary’s half-sister were dismissed.

In 2000, two years after the Alabama Court of Criminal Appeals affirmed the conviction, the state Supreme Court reversed and remanded the case for a new trial based on prosecutorial misconduct. Afterwards, the Southern Center for Human Rights, working with lawyers Richard Jaffe and John Mays, won him an acquittal in 2001. The Center later presented Gary to the United States Senate Judiciary Committee in order to illustrate the urgent demand for competent lawyers for those facing the death penalty.

“The guys there are just like you and I,” Gary said of those he met on death row. “People depict them as animals in a cage to be kept in chains. But they’re human beings. They’re decent human beings. Some made a bad mistake. But people change. Some guys down there need to be down there for a long, long time, maybe the rest of their lives. But a lot of guys down there changed and would never harm someone again.” Today, Gary lives and works in Cullman, Alabama, and is active in the movement to abolish the death penalty.