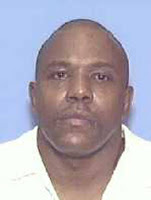 A northeast Texas man was set to receive a lethal injection Thursday for the slayings of an elderly couple found brutally beaten and stabbed in their home.
Larry Wooten was condemned to death for the September 1996 killings of 80-year-old Grady Alexander and his 86-year-old wife, Bessie.
The Alexanders were beaten with a cast iron skillet and a pistol, stabbed and had their throats slit and heads almost severed. Prosecutors said Wooten robbed the couple, taking their savings of $500, so he could buy cocaine.
The 51-year-old would be the 17th inmate executed this year in the nation’s most active death penalty state.
Wooten said he didn’t kill the couple, for whom he formerly worked doing odd jobs. He claimed he went to their home in Paris, located about 105 miles northeast of Dallas, found the bodies and fled. Wooten had at one time been married to the couple’s niece.
But DNA evidence, including blood found on the Alexanders’ kitchen floor and matched to Wooten, helped convict him. A pair of Wooten’s pants stained with Grady Alexander’s blood also were found near an area where Wooten had bought drugs around the time of the murders.
“I don’t want to be executed. But Texas is going to do what they’re going to do,” Wooten said in an interview last month.
Wooten’s attorneys said his appeals have been exhausted.
“I don’t anticipate anything more being filed on his behalf,” Robin Norris, Wooten’s appellate attorney, said Thursday.
The U.S. Supreme Court earlier this month refused to consider Wooten’s appeal. On Tuesday, the Texas Board of Pardons and Paroles rejected a plea to commute his sentence to life in prison.
Kerye Ashmore, a former Lamar County district attorney who prosecuted the case, called Wooten a “scary guy” with a history of violence, including a prior conviction for assaulting an elderly woman after breaking into her home. He also was a person of interest in the murder of another elderly woman in Paris who was killed a couple of weeks before the Alexanders, Ashmore said.
“If you are going to have a death penalty, this is the kind of people you want to have the death penalty for,” said Ashmore, now the first assistant district attorney in nearby Grayson County.
In his appeal to the Supreme Court, Wooten’s attorneys argued he wouldn’t have turned down a plea bargain if he knew about additional DNA evidence that didn’t become available until after his trial began.
Wooten turned down a plea agreement of life in prison after DNA experts working for his trial attorneys believed the blood evidence didn’t reliably connect him to the crime. But after the trial began, additional lab results showed the DNA evidence was stronger than originally thought, Wooten’s appeals said.
Ashmore said he never misrepresented the strength of the DNA evidence.
The 5th U.S. Circuit Court of Appeals in March ruled both sides are at risk in a plea offer and there’s no constitutional right to a plea bargain.
In prior appeals, Wooten had claimed he should not be executed because he is mentally retarded. But his claim was denied as tests put his IQ between 77 and 84. An IQ of 70 is considered the threshold for mental impairment.