By Texas Moratorium Network On January 9, 2011 · Add Comment · In Uncategorized 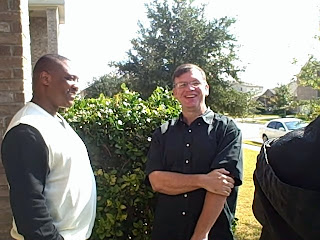 Shortly before Thanksgiving, Texas Moratorium Network delivered $3,000 to Anthony Graves that we had raised from our supporters and friends. Since then we have received additional donations for Anthony, so the new grand total of donations we have raised for him is $3,573, which includes the latest donation of $150 that we received yesterday.

Anthony has still not received any compensation from the State of Texas, but his lawyers continue to work to get him what he is owed from Texas for the 18 years he spent on Texas death row for a crime he did not commit.

Below is an an article from the Brenham Banner Press from Dec 31 with the latest news about the effort to get him compensated from Texas. At least during his time of need, generous individual people stepped forward and donated to help after his release. Thank you to everyone who has donated.

From the Brenham Banner Press:

The attorney for Anthony Graves says District Attorney Bill Parham has sabotaged attempts by Graves to receive reparations for 18 years of wrongful imprisonment.

Katherine Scardino said she is incensed that Parham refused to sign a request to change the wording on Graves’ dismissal to include the words “actual innocence,” a declaration vital to Graves’ reparation attempts.

“All he (Parham) has got to do to get this man the money he deserves is sign it,” said Scardino.

A state statute enacted last year provides $80,000 for each year of wrongful imprisonment. Graves, if his request is approved, would be eligible for more than $1.4 million.

But an obviously angry Scardino said Parham has in essence squashed Graves’ claim by refusing to amend the dismissal order signed in November by District Judge Reva Towslee Corbett.

“The real reason lies at the feet of Bill Parham and nobody else,” she said. “She (Corbett) will sign the order if Bill Parham will. It’s all his fault.”

“Of course it does. It’s a very simple procedure. There’s a form you fill out, a few other things that the statute requires you to submit. And if it complies with the statute, you get compensation,” she said.

Scardino said Graves’ attorneys didn’t press to include “actual innocence” on the original order because “we didn’t want to risk having the dismissal withdrawn.”

“I didn’t want him (Parham) coming back and doing something really stupid,” said Scardino.

Scardino also downplayed Parham’s role in Graves’ release, instead crediting former Harris County Assistant District Attorney Kelly Seigler, who was hired by Parham to investigate the case; and Otto Hanak, a former Texas Ranger who is now an investigator with the district attorney’s office.

Scardino said Seigler at a press conference held the day after Graves’ release used the words “actual innocence” and is willing to sign an affidavit to that effect.

Without a declaration of “innocent” in the order dismissing the case against Graves, the reparation filing “is probably going to be denied,” said Scardino.

The next step would be to ask Gov. Rick Perry to issue a full pardon for Graves, she said.

But Scardino also had harsh words for Perry, who after Graves’ release said it showed that the system “works.”

“Yeah, after 18 years it works just great,” Scardino said sarcastically. “Gov. Perry made that idiotic statement … if we go to him for a pardon, let’s just see how well he believes that.”

Parham said Thursday that he would not sign an agreement to change the wording because there is “no definition” of actual innocence.

He also said his office is not involved in any efforts by Graves to receive reparations.

“I have nothing to do with that,” said Parham.

Several organizations have set up Internet sites in which donations can be to Graves. The Texas Moratorium Network, an organization pushing for a moratorium on capital punishment, last month delivered a $3,000 donation to Graves.