February 22, 2011 is "Texas for Illinois Day" to Repeal the Death Penalty!

By Texas Moratorium Network On February 19, 2011 · Add Comment · In Uncategorized 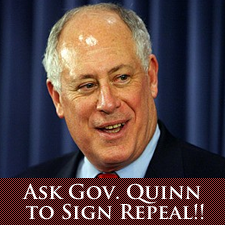 Texans are planning to help convince Illinois Governor Pat Quinn to abolish the death penalty in Illinois. On Tuesday, February 22, 2011, Texans will be calling the Governor of Illinois to urge him to sign the bill to repeal the death penalty.