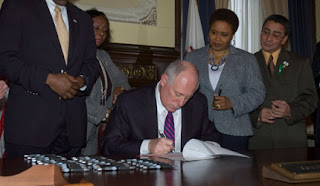 Today I have signed Senate Bill 3539, which abolishes the death penalty in Illinois.

For me, this was a difficult decision, quite literally the choice between life and death. This was not a decision to be made lightly, or a decision that I came to without deep personal reflection.

Since the General Assembly passed this bill, I have met or heard from a wide variety of people on both sides of the issue. I have talked with prosecutors, judges, elected officials, religious leaders from around the world, families of murder victims, people on death row who were exonerated and ordinary citizens who have taken the time to share their thoughts with me. Their experiences, words and opinions have made a tremendous impact on my thinking, and I thank everyone who reached out on this matter.

After their guidance, as well as much thought and reflection, I have concluded that our system of imposing the death penalty is inherently flawed. The evidence presented to me by former prosecutors and judges with decades of experience in the criminal justice system has convinced me that it is impossible to devise a system that is consistent, that is free of discrimination on the basis of race, geography or economic circumstance, and that always gets it right.

As a state, we cannot tolerate the executions of innocent people because such actions strike at the very legitimacy of a government. Since 1977, Illinois has seen 20 people exonerated from death row. Seven of those were exonerated since the moratorium was imposed in 2000. That is a record that should trouble us all. To say that this is unacceptable does not even begin to express the profound regret and shame we, as a society, must bear for these failures of justice.

Since our experience has shown that there is no way to design a perfect death penalty system, free from the numerous flaws that can lead to wrongful convictions or discriminatory treatment, I have concluded that the proper course of action is to abolish it. With our broken system, we cannot ensure justice is achieved in every case. For the same reason, I have also decided to commute the sentences of those currently on death row to natural life imprisonment, without the possibility of parole or release.

I have found no credible evidence that the death penalty has a deterrent effect on the crime of murder and that the enormous sums expended by the state in maintaining a death penalty system would be better spent on preventing crime and assisting victims’ families in overcoming their pain and grief.

To those who say that we must maintain a death penalty for the sake of the victims’ families, I say that it is impossible not to feel the pain of loss that all these families share or to understand the desire for retribution that many may hold. But, as I heard from family members who lost loved ones to murder, maintaining a flawed death penalty system will not bring back their loved ones, will not help them to heal and will not bring closure to their pain. Nothing can do that. We must instead devote our resources toward the prevention of crime and the needs of victims’ families, rather than spending more money to preserve a flawed system.

The late Cardinal Joseph Bernadin observed, “[i]n a complex, sophisticated democracy like ours, means other than the death penalty are available and can be used to protect society.” In our current criminal justice system, we can impose extremely harsh punishments when warranted. Judges can impose sentences of life imprisonment without the possibility of parole. Where necessary and appropriate, the state can incarcerate convicted criminals in maximum security prisons. These means should be sufficient to satisfy our need for retribution, justice and protection.

As Governor, I took an oath to uphold our state’s Constitution and faithfully execute our laws. Honoring that oath often requires making difficult decisions, but I have found none to be as difficult as the one I made today. I recognize that some may strongly disagree with this decision, but I firmly believe that we are taking an important step forward in our history as Illinois joins the 15 other states and many nations of the world that have abolished the death penalty.