By Texas Moratorium Network On April 4, 2011 · Add Comment · In Uncategorized 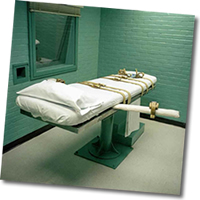 Call Texas Governor Perry to register your opposition to Tuesday’s scheduled execution in Texas of Cleve Foster, who is the first person scheduled to be killed by Texas using a new drug after the state was unable to legally acquire the drug used in past executions.

Perry’s phone number is  512 463 2000. Email Perry through his website here. Urge Perry to use his power to stop this execution by issuing a 30 day stay of execution.

People will gather in Austin outside the gates of the Texas Capitol at 11th Street and Congress Avenue at 5:30 PM on Tuesday April 5 to protest the scheduled execution of Cleve Foster.

Read a statement by Foster’s attorney about the state’s plans to use a new execution drug in his scheduled execution, which says in part:

“Texas is rushing to carry out an execution using an entirely new protocol, but they refuse to fully disclose basic information, such as whether any medical authorities were consulted regarding the incorporation of a new drug; the source of the pentobarbitol; and the training of personnel who will implement the new procedure for the first time.

“Prison officials are not medical professionals. They cannot be trusted to change a medical procedure in the dark of night without public scrutiny, especially when there is such a minimal track record on the use of pentobarbital in lethal injections. To ensure that the new protocol comports with Texas’ constitution, we need — and Texas law requires — a deliberative process with appropriate authoritative input and public comment.  We expect our state officials to not conduct its business in secret – particularly when it concerns the ultimate act that Texas can take against one of its citizens.  The rush to execute should not trump the need to ensure that appropriate safeguards have been taken, or the far reaching implications of circumventing a deliberate process, especially when it is TDCJ that has waited until the last minute to decide on or announce the change in how it plans to carry out executions.”

Foster maintains he was not responsible for the murder of the victim. His co-defendant, who died in prison awaiting execution, also said that Foster did not kill the victim. Read more about the case in legal documents supplied to the Dallas Morning News by Foster’s sisters.

Cleve Foster says he’s not afraid to die — but he doesn’t want to be a guinea pig.
Foster would be the first Texas inmate executed with a new drug in the nation’s busiest death penalty state if his lethal injection scheduled for Tuesday evening is carried out in Huntsville. It’s the most significant change in the execution procedure in Texas since the state switched from the electric chair when it resumed carrying out capital punishment in 1982.
The Texas Department of Criminal Justice, like other corrections agencies around the nation, has been unable to find a supplier of sodium thiopental, one of the three drugs it has been using in a lethal chemical mixture. The department announced last month it would begin using pentobarbital as a substitute. The sedative used in surgery and to euthanize animals is already used in executions in Ohio and Oklahoma.
In an interview from death row, Foster, 47, said he thinks Texas’ decision to switch is wrong.
“How can Texas use something said to not be fit to kill a dog?” Foster asked, embracing criticisms of the drug that have failed to convince courts to block its use in the other states.
Foster’s lawyers have challenged the switch and execution procedures in an attempt to stop his death. They questioned whether Texas prison officials properly followed state administrative procedures when they announced the drug switch and argued the state illegally purchased the drugs to be used with an invalid federal permit.
Foster, a former Army recruiter, and an his roommate Sheldon Ward were sentenced to death for the murder of Nyaneur Pal, a 30-year-old Sudanese refugee they met in a bar. Her body was found in a ditch on Valentine’s Day 2002. The men also were charged but never tried for the shooting death of Rachel Urnosky, 22, at her Fort Worth apartment in December 2001.
Foster came close to death in January. He was sitting in a small holding cell in the Texas death house at the Huntsville Unit prison when the U.S. Supreme Court stopped his execution to look at a late appeal from his lawyers.
“I looked at that gray door . . . the world’s busiest death chamber,” he said. “I thought: Man, there’s no good there.”
A week later, the high court rejected the appeal, allowing Foster’s execution to be reset for Tuesday.
“I’m not scared,” he said. “It’s hard to explain.”
He said he appreciated the dozens of letters he has received, many from religious groups, as his January date approached.
“One thing bothered me,” he said. “They took for granted I actually killed somebody.”
Foster has insisted Ward was responsible for fatally shooting Pal. Prosecutors, however, are equally adamant that evidence showed Foster actively participated in the woman’s death, that he offered no credible explanations and lied and gave contradictory stories about his sexual activities with Pal.
Ward, one of Foster’s recruits, died of cancer last year while on death row. The two had been convicted separately. Pal, who was known by the first name Mary, worked at a country club and was seen talking with the pair at a Fort Worth bar. Her body was found hours later in a ditch off a Tarrant County road. She’d been shot once in the head.
A gun recovered from the motel room where Foster and Ward lived was identified as the murder weapon — and as the gun used to kill Urnosky.
Pal’s blood and tissue was found on the weapon, and DNA evidence showed both men had sex with her. Foster said he was passed out from sleeping pills when Pal would have been murdered. Ward said the sex was consensual, and Foster was unconscious when Pal had sex with him.
A detective testified Pal was not killed where pipeline workers found her body and that Ward had to have help moving her. Witnesses said Ward and Foster were inseparable.
Foster acknowledged he and Ward were at Urnosky’s apartment but said they left when she refused to have sex with them. She was a recent honors graduate from Texas Tech, an officer with the Baptist Student Mission at the Lubbock university and had spent her spring breaks on mission trips.