By Texas Moratorium Network On April 7, 2011 · Add Comment · In Uncategorized

Lethal Injustice: Standing against the death penalty and harsh punishment. 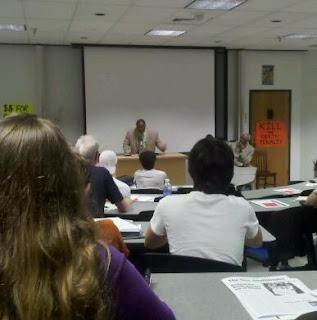 We heard Anthony Graves speak Thursday night at CEDP’s panel discussion at UT-Austin. He is such an eloquent speaker and his story is so powerful. The members of the Texas Legislature should think about what happened to Anthony and acknowledge that the same thing could happen to any of us. Anthony was completely innocent yet he was condemned to death in Texas. Anthony is walking evidence why Texas should enact a moratorium and start discussing the future of the death penalty in Texas.

Featuring Anthony Graves, who was wrongfully imprisoned for 18 years on Texas death row before he was freed just last year. Lawrence Foster, grandfather of Kenneth Foster who spent 11 years on death row before his sentence was commuted in 2007 by Governor Perry. Laura Brady, abolitionist and activist with the Campaign to END the Death Penalty.

Come hear their powerful stories about the criminal INjustice system.

***********
A speaking tour to look at what’s behind our massive prison build-up, why so many people of color are locked up and what we can do about it.

From death rows to super-maxes, over 2.3 million men and women sit behind bars today. “Lethal Injustice” speakers are organizing on the front-lines of the fight against criminal injustice, taking a stand against the racist, prison build-up and harsh sentencing.

This national speaking tour of the Campaign to END the Death Penalty will be featuring panelists including exonerated prisoners, family members, activists, lawyers and scholars.

This event is being held at the University of Texas in Austin, Texas in The University Teaching Center, room UTC1.102. A campus map to this building can be found here.

UTC is located at the corner of University Ave. and 21st Street.

A $5 suggested donation is encouraged, help keep events like this one happening in your area!

Event to begin promptly at 7pm, discussion will follow the speaker’s presentations.