By Texas Moratorium Network On October 14, 2015 · Add Comment · In Uncategorized

Journey of Hope…from Violence to Healing is an organization led by murder victim family members that conducts public education speaking tours and addresses alternatives to the death penalty. At least 8 of them will attend the 16th Annual March to Abolish the Death Penalty on October 24, 2015 at the Texas Capitol at 2 PM. George White
As a survivor of a violent crime, husband of a murder victim, suspect, accused, indigent defendant, convicted murderer, and innocent man exonerated, George understands fully how easy it would be to advocate revenge. However, as a family the Whites reject the death penalty as a solution to heal the wounds of their loss. George says, “I believe that society’s laws must offer relief for a victim’s anger and loss, and we must be afforded protection from those who would harm us; however, one cannot stop the shedding of blood by causing more blood to be shed. No amount of killing would restore Char to my family or take away the pain of losing her. What began with a horrible act of violence should not be memorialized with an act of vengeance.” 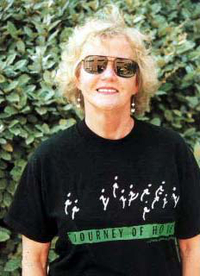 Marietta Jaeger Lane
Marietta‘s 7-year-old daughter Susie was kidnapped from the family’s tent during a camping vacation. For a year, the family knew nothing of Susie’s whereabouts. On the first anniversary of Susie’s disappearance, the kidnapper telephoned Marietta and inadvertently revealed sufficient information to enable the FBI to identify and then arrest him.

Marietta asked that the mentally ill man be given the alternative allowed in capital cases: a mandatory life sentence instead of the death penalty. Only then was the kidnapper willing to confess to Susie’s  murder, as well as to the deaths of three other young persons
in the same county. He committed suicide just hours later. 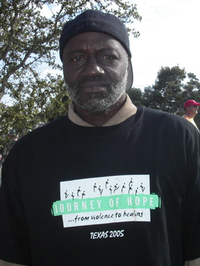 Shujaa Graham was born in Lake Providence, LA, where he grew up on a plantation. His family worked as share-croppers, in the segregated South of the 50s. In 1961, he moved to join his family who had moved to South Central Los Angeles, to try to build a more stable life. As a teenager, Shujaa lived through the Watts riot and experienced the police occupation of his community.
In and out of trouble, he spent much of his adolescent life in juvenile institutions, until at age 18, he was sent to Soledad Prison.

Within the prison walls, Shujaa came of age, mentored by the leadership of the Black Prison movement. Shujaa taught himself to read and write, he studied history and world affairs, and became a leader of the growing movement within the California prison system, as the Black Panther Party expanded in the community.

In 1973, Shujaa was framed in the murder of a prison guard at the Deul Vocational Institute, Stockton, California. As a recognized leader within and without the prison, the community became involved in his defense, and supported him through 4 trials. Shujaa and his co-defendant, Eugene Allen, were sent to San Quentin’s death row in 1976, after a second trial in San Francisco. The DA systematically excluded all African American jurors, and in 1979, the California Supreme Court overturned the death conviction.

After spending three years on death row, Shujaa and Eugene Allen, continued to fight for their innocence. A third trial ended in a hung jury, and after a fourth trial, they were found innocent. As Shujaa often says, he won his freedom and affirmed his innocence in spite of the system.

Shujaa was released in March, 1981, and continued to organize in the Bay area, building community support for the prison movement, as well as protest in the neighborhoods against police brutality.

In the following years, Shujaa moved away from the Bay area. Shujaa learned landscaping, and created his own business. He and his wife raised three children, and became part of a progressive community in Maryland.

Randy Gardner is the brother of Ronnie Lee Gardner, who was executed by the state of Utah on June 18, 2010, by firing squad, a first in the USA in 14 years. Randy bought 160 acres of property in northwest Box Elder County in 2002 and started Back to Basics Farm & Ranch. Its mission is to teach youth about farming, ranching and organic gardening — something Ronnie Lee had taken great interest in prison. Randy helps young people to give back to their communities and in turn to gain dignity and self worth.
Terri Steinberg 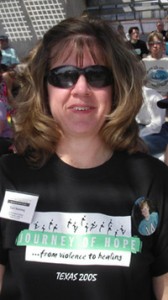 At the age of 20, Terri‘s son, Justin Wolfe, ex-high school football player and normal, average, all American, suburban kid was sentenced to death for a murder he did not commit. He has been on Virginia’s death row since 2002, becoming their youngest resident, and has had several stays of execution. 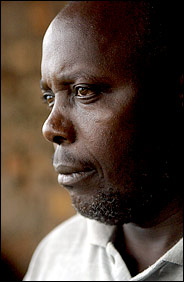 Delia has been employed at Applied Materials, St. Edward’s University, Texas Society of Professional Engineers, and is presently teaching Bilingual children in Elgin, TX.  She is one of 5 children – David, Delia, Irene, Louis, and Ernest, Jr.  One of her brothers, Louis Castro Perez is an innocent man on Texas’ Death Row.  “When Louis was wrongfully convicted 13 years ago, and sent to death row, our family embarked on the most incredible journey of our lives – trying to save an innocent man from death row in Texas.”