By Texas Moratorium Network On August 15, 2008 · Add Comment · In Uncategorized

The Houston Chronicle is reporting that the Texas Forensic Science Commission unanimously authorized the investigation into whether Cameron Willingham was wrongfully executed by Texas.

Cameron Willingham never stopped insisting he was innocent of murder. Even as he lay strapped to a gurney awaiting execution, the burly Corsicana auto mechanic denied setting the house blaze in which his 1-year-old twins and 2-year-old stepdaughter were incinerated.

Now, 17 years after the deadly fire and four years after the execution, a state commission charged with investigating negligence and misconduct complaints against forensic labs has agreed to look into allegations that Willingham was convicted and sentenced to die on fire officials’ faulty testimony.

Meeting Friday in Houston, the nine-member Texas Forensic Science Commission unanimously authorized the investigation in response to a complaint filed by The Innocence Project, a New York City-based group dedicated to exonerating the wrongfully convicted.

The commission also agreed to investigate a 1986 West Texas arson fire in which two people died. Oilfield worker Ernest Willis, 63, was sentenced to die for the crime. But just months after Willingham’s execution, a judge found Willis had been convicted on faulty scientific evidence and he was freed.

“These two cases in Texas are just the tip of the iceberg,” Innocence Project co-director Barry Scheck said in an e-mail statement. “Across Texas and around the country, people are convicted of arson based on junk science that has been completely discredited for years.”

The New York group buttressed its call for the investigations with a 48-page analysis of testimony from both trials. A five-member panel of national fire experts, who conducted the analysis, found much of the trials’ expert testimony relied on outdated, invalid investigative criteria and called for improved training of fire investigators and prosecutors who handle such cases.

Using faulty standards
Commissioner Alan Levy, a member of the Tarrant County District Attorney’s Office in Fort Worth, suggested that arson witnesses might not have been guilty of misconduct if they testified using standards accepted at the time.

“What you’re saying,” he told Innocence Project researcher Gabriel Oberfield, who was present for the session, “is that it was pretty much the Wild West back then. That the state of the science was dismal.”

Oberfield responded that reliable investigative standards may or may not have been available at the time of the trial, but had been adopted long before Willingham’s execution.

Investigative agencies, he contended, have a “continuing obligation” to inform courts when such critical standards are updated.

Under questioning by Navarro County District Attorney John Jackson, Vasquez told jurors he had found “puddle configurations” and “pour patterns” that indicated a flammable substance had been ignited on the floor.

Innocence Project investigators responded that such marks were caused by intense heat in the room creating a “flashover” — the instantaneous ignition of all combustible items in a room.

The only way to guarantee that an accelerant had been involved in a blaze, they wrote, is through laboratory testing for residue.

Vasquez told jurors that the fire originated in three locations — an indication that it had been deliberately set.

But the New York group’s investigators countered that the three locations were, in fact, contiguous.

Vasquez said burn marks beneath a bed and under an aluminum plate in a door threshold were indicative of an arson.

“Each and every one of the ‘indicators’ listed by Mr. Vasquez means absolutely nothing, and, in fact, is expected in a context of a fire that has achieved full room involvement, as this fire clearly did,” the investigators argued.

“Low burning, charred flooring, burning underneath items of furniture are common characteristics of a fully involved fire,” they insisted. “They mean nothing with respect to the origin and cause of the fire.”

Assertions criticized
The investigators also were critical of Vasquez’s assertions to the jury that Willingham had lied.

“I talked to the occupant of this house and I let him talk and he told me a story of pure fabrication,” Vasquez told jurors.

Fire, he testified, “tells the story. I am just the interpreter. I am looking at the fire, and I am interpreting the fire. That is what I know. That is what I do best. And the fire does not lie. It tells me the truth.”

Jackson, now a Navarro County state district judge, was out of the office and could not be reached for comment.

Commission members delayed hiring an investigator to review the Willingham and Willis cases until their October meeting, but voted to ask the state fire marshal’s office to respond to the Innocence Project’s allegations.

Commissioners debated at length whether their investigator should be provided the critique penned by the Innocence Project’s panel or simply advised of the complaint. No decision was reached.

The Legislature created the commission in 2005 in response to the Houston Police Crime lab scandal and irregularities with other forensic labs in the state. 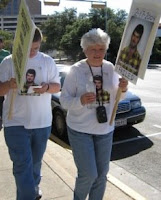 At the 7th Annual March to Stop Executions in 2006, the family of Cameron Willingham delivered the letter below to Governor Rick Perry.