Letter to Board of Pardons and Paroles Regarding Frank Moore: Execution Date Jan 21 Coretta Scott King on the Death Penalty

By Texas Moratorium Network On January 16, 2009 · Add Comment · In Uncategorized 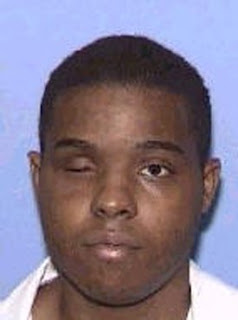 Below is a letter written by Stefanie Collins regarding Andre Thomas, who is pictured to the left before he pulled out his remaining eye and ate it. A few years ago he had pulled out his right eye. He no longer has any eyes.

Stefanie Collins is a member of Campaign to End the Death Penalty and a 2008 graduate of the University of Texas at Austin Law School.

Re: Texas death row inmate pulls out eye, eats it

I have corresponded with Andre Thomas, the young man on Texas’ death row who recently tore out his remaining eye, for over a year. The trial record and my own personal experience with Mr. Thomas both attest to his severe mental illness. Mr. Thomas has struggled with debilitating paranoid schizophrenia since his late adolescence (as is normal with the disease). His illness was the direct cause of the terrible crime he committed.

Texas ranks near the bottom of the nation in per capita mental health care spending. The indigent, like Mr. Thomas and his victims, bear the burdens of our neglect of this critical social service. Mentally ill citizens who pose a threat to themselves and others, like Mr. Thomas did, go to health care facilities begging for help every day and are turned away because of lack of funding and capacity. Sadly, some, like Mr. Thomas, in the grips of illness go on to commit violent crimes.

It’s simple. We can provide the necessary health care for our citizens and prevent tragedies like the murders of the innocent victims of Mr. Thomas and save money. If we choose not to do so, we can wait until after the crimes take place and multiple lives have been destroyed and spend extra money to keep sick people wasting away in cages until the time comes to execute them. If we choose the latter, what kind of explanation should we offer to the families of the victims of these preventable crimes?