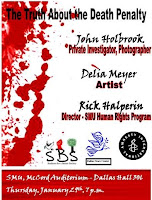 DALLAS — John Holbrook, a former crime scene photographer, takes portraits of the men and women on death row in Texas. Holbrook’s project began as a way to address his own trauma over seeing horrific crime scene images at work.

The message of Holbrook’s work is ultimately about forgiveness and how it can empower victims to move past traumatic events.

In the featured story, News 8 photojournalist, Doug Burgess, along with reporter David Schechter, take you inside Texas’ Death Row for a rare glimpse at the people behind the headlines.

Holbrook will lecture and exhibit his work at Southern Methodist University on Thursday, January 29th at 7 p.m. at the McCord Auditorium located at 306 Dallas Hall.

One of those cases involved the double homicide of North, teenagers Carrie Crews and Jesus Garza. Carrie Crews was raped, tortured and murdered.  The two perpetrators were James Lee Clark and James Brown.  I was part of the defense for these two defendants.

While working that case, I spent hours examining the crime scene evidence including the photographs. The images were very graphic.  Some years later, I started to experience ‘Post Traumatic Stress Disorder’.  Whenever he saw anything remotely similar to the injuries done to Carrie Crews (crime scene photographs), I experienced extreme anxiety.

I saw a psychologist regarding the PTSD.  The Doctor determined that my current photography at that time (pictures of social outcasts shown in a spiritual light) was a subconscious attempt to correct the ‘Bad Pictures’ I saw while working the capital murder case .

Ultimately, I learned that that only way I could overcome his PTSD was to learn how to Love and Forgive those who had caused it; James Lee Clark.

I maintain that, it takes a work of art to ultimately address the collective consciousness  that is .  It was the American book entitled, ‘Uncle Tom’s Cabin’ that spoke to this collective consciousness and turned the tide against slavery in .    I hope that my images will modestly follow in these footsteps and finally address that entity that will finally help turn the tide against the death penalty.