By Texas Moratorium Network On March 8, 2009 · Add Comment · In Uncategorized 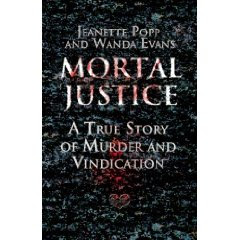 We received a copy yesterday of Jeanette Popp’s long-anticipated new book in the mail. Mortal Justice: A True Story of Murder and Vindication. It was published March 1. Jeanette has worked long and hard for many years against the death penalty. She served several years as chairperson of Texas Moratorium Network. Her book tells the story of her daughter’s murder, the wrongful conviction of two innocent men Chris Ochoa and Richard Danziger, their eventual exoneration, the subsequent conviction of the real killer, and Jeanette’s long activism against the death penalty, including a jailhouse meeting with the real killer and her successful efforts to prevent him from being sentenced to death.

The book can be bought on Amazon.

In her new book, Jeanette includes an account of a jailhouse meeting with the man who actually killed her daughter before his trial because she wanted to convince him to take a plea bargain and accept life in prison istead of going to trial and risking the death penalty. In the jailhouse meeting, she told him, “Mr Marino, you know I don’t want you executed?”

“Ive heard that,” he answered stoically.

He shook his head and told her, “Mrs Popp, I’d rather be executed than spend the rest of my life in prison.”

Ms. Popp asked prosecutors not to seek the death penalty, because she says she did not want her daughter’s memory stained with someone’s blood. “I’m not a bleeding heart liberal,” she says. “But I do have a heart.”

Since the exoneration, she has been an outspoken opponent of the death penalty. That doesn’t mean she wants Mr. Marino to ever walk free.

We talked to Jeanette yesterday and she plans to come to Lobby Day Against the Death Penalty on March 24 at the Texas Capitol in Austin. In 2001, Jeanette’s testimony to the House Criminal Jurisprudence Committee was instrumental in persuading that committee to vote in favor of a moratorium on executions. This year, the same committee will again consider a proposal by State Rep Harold Dutton to enact a moratorium on executions and create a commission to study the death penalty system in Texas.