By Texas Moratorium Network On May 7, 2009 · Add Comment · In Uncategorized 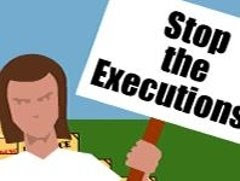 The deadline to vote for Texas anti-death penalty groups in the Jenzabar Social Media Leadership Award contest for $3,000 is Friday, May 8, at midnight.

They will announce the finalists on May 11 and the winner on May 13. We are doing great, especially considering our entry is made up of all-volunteer groups that are able to accomplish a lot with very little funding.

We just had another great success by getting a floor vote for Monday on the Law of Parties bill that we have been lobbying in favor this session. We held a lobby day on March 24, we met with legislators again last week, we testified in committee, we made many phone calls, we held a rally on May 2, and now the vote is this Monday. We could not have done it without social media.

These grassroots groups work against the death penalty in the state that has executed more people than any other state. Texas has executed 437 people since 1982. The second place state has executed 103.

A few weeks ago, members of the groups were at the Texas capitol from 9:30 to 1 AM meeting with legislators about HB 2267 to end the death penalty under the Law of Parties, talking to the media and testifying at the hearing on the Sharon Keller impeachment resolution. In 2007, Texas Moratorium Network used online social media tools to gather around 1,900 signatures on a judicial complaint against Keller. Here is a video of a news report on Austin TV Monday night.

While at the capitol, we updated supporters online by posting to the blog, using Twitter and uploading video to Facebook and YouTube, all good examples of using social media tools to affect change and build a movement, and a good reason our groups should win the Social Media Leadership Award. Vote for us at the link below.

If you think these groups have been doing a good job using online social activism tools, especially considering that they are all-volunteer organizations, please vote for us in The Jenzabar Foundation Social Media Leadership Award by leaving a comment on our entry.