Bob Ray Sanders on the 200th Execution Under Rick Perry

By Texas Moratorium Network On June 6, 2009 · Add Comment · In Uncategorized

Bob Ray Sanders devotes his Sunday column to the 200th execution under Governor Rick Perry. Here are a few excerpts:

Last Tuesday, as the state of Texas prepared to execute Terry Lee Hankins, people gathered in several U.S. cities and on two continents to mark a milestone in Rick Perry’s tenure as governor.

Hankins, by no means a sympathetic character because of his gruesome crimes, became the 200th person to be executed in Texas since Perry has been in office. He was the 16th to be put to death by the state this year.

Texas is notorious throughout the world for the number of executions it carries out each year, raising fears that the state has made mistakes and that innocent people likely have been killed in the death chamber.

He also mentioned one of the speakers at the Huntsville protest that came down from Nacogdoches.

One of the speakers at the Huntsville protest last week was Jerry Williams, a sociology professor at Stephen F. Austin State University, whose sister was beaten to death on Mother’s Day morning in 1985. Her assailant was given life in prison, but was released on parole after serving 15 years in prison.

"I hated him," Williams said. "I wanted to see him die. I wanted to see him suffer in prison. And I thought justice would be done only in that way. But what I realized over time was that my hate really diminished me. It damaged me and did nothing for him."

He also reports on a report from Amnesty that said:

Texas, where about seven percent of the U.S. population resides, and where fewer than 10 percent of murders occur, has accounted for 37 percent of the country’s executions since 1977, and 41 percent since 2001, when Governor Perry came into office."

It went on to point out, "There were 152 executions in Texas during the nearly six years of the [George W.] Bush governorship (1995-2000). Now looming is the 200th execution during Rick Perry’s term in office. The combined total of more than 350 executions in Texas under these two governors represents 30 percent of the national total since executions resumed in the USA in 1977. Virginia is ranked second to Texas in executions. In 30 years, Virginia has killed 103 people in its death chamber, half the number put to death in Texas in eight. This is geographic bias on a grand scale.

"How many of the 200 people executed under Perry’s watch were innocent?" asked Scott Cobb, president of Texas Moratorium Network, which helped organize the protests. "Perry could have taken a large step to reduce the risk of executing an innocent person if he had supported a moratorium on executions. Now, he may have to answer for the execution of Todd Willingham, who most likely was innocent of the arson/murders for which he was executed in 2004."

Below are a few videos from the Huntsville protest. 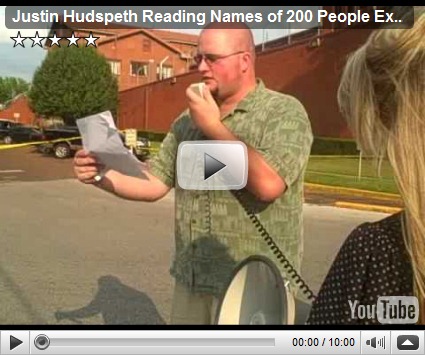 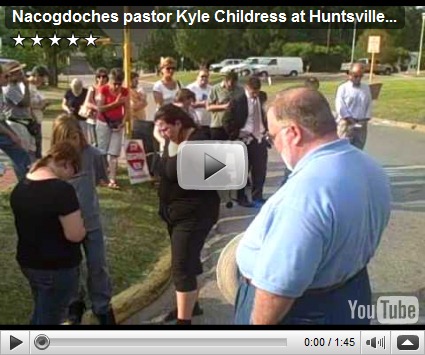 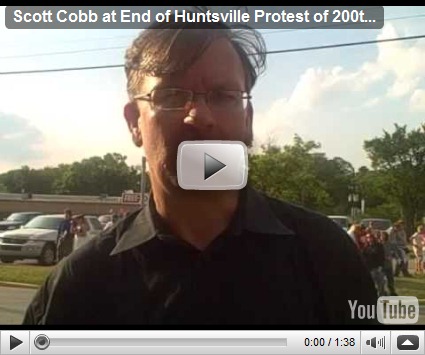