Bob Ray Sanders on the 200th Execution Under Rick Perry Answer the KXAN Poll: "Would you re-elect Judge Meyers" to the Texas Court of Criminal Appeals?

By Texas Moratorium Network On June 9, 2009 · Add Comment · In Uncategorized 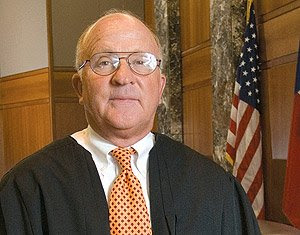 The longest serving Judge on the Texas Court of Criminal Appeals, Lawrence “Larry” Meyers, has announced he is seeking re-election in 2010. The Court has been called a national laughingstock by one of its other members because of the actions of Sharon Keller and that was years before Keller made it even more of a laughingstock by closing the court in 2007 and refusing to accept a legal appeal from a person about to be executed. Currently there are no Democrats serving on the Court of Criminal Appeals, but we hope the Democrats persuade a strong candidate to run in 2010. It does not serve justice to have every member of any court to be all from the same political party.