By Texas Moratorium Network On July 1, 2009 · Add Comment · In Uncategorized 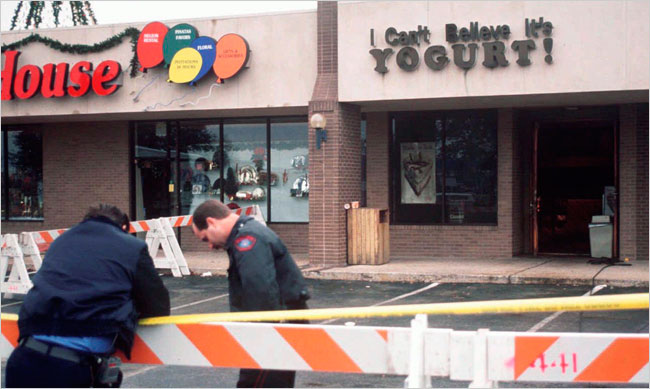 The New York Times today has a long article on the Yogurt Shop case, “New Evidence Opens Old Wound in 1991 Slaying of 4 Girls“. Last week, Robert Springsteen and Mike Scott were released from jail on personal recognizance bonds. They both had been incarcerated more than ten years before their convictions were overturned. Springsteen had spent four years under a death sentence before his death sentence was commuted to life because the U.S. Supreme Court banned executions of juvenile offenders. A judge released them after the DA said she was not ready to begin a new trial for either of them because she can not identify whom the new DNA evidence belongs to, although it does not belong to either Scott of Springsteen or anyone else so far associated with the case.

In the Times article, the wife of Mike Scott, Jeannine, said the authorities were grasping at straws. “They have got a sinking ship,” she said, “and they are trying to figure out how to save it.”

AUSTIN, Tex. — Seventeen years have come and gone. The yogurt shop where four teenage girls were raped and murdered has been replaced with a payday loan store. No sign remains of the fire the killers set to cover their tracks; no plaque marks the place where the girls died.

Yet this city has been unable to put the horrific crime to rest. Last week, two men who were awaiting retrial for the murders walked out of jail on bond after new evidence surfaced suggesting that someone else might have taken part in the attack.

The men, Michael Scott, 35, and Robert Springsteen, 34, had been convicted in one of the slayings years ago, but an appeals court overturned the verdict, ruling that the men’s confessions were improperly used against each other.

Now the new evidence — an unknown man’s DNA found on at least one of the girls — has thrown those confessions into doubt. The district attorney’s office has tested scores of people, hunting for the mystery person.

Defense lawyers argue that the DNA belongs to the true killer and proves their contention that the confessions of the convicted men were a coerced mass of falsehoods. But the authorities say investigators may have contaminated the evidence.

The events have raised two possibilities deeply troubling to many in this city, which is home to both the state Capitol and the University of Texas. One is that two innocent men have served nine years in prison for a crime they did not commit. The other is that there might be another killer out there.

“We wanted this case to be closed, but there is this gnawing sense that perhaps it wasn’t,” said Thomas Spencer, the head of an association of ministers in Austin. “We wish we had more certainty.”

Click here to read the entire article.Here is a video of the welcome home celebration for Mike Scott.