Put Extra Security Around the Artwork in the Texas capitol! Borris Miles May Be Coming Back as a State Representative

By Texas Moratorium Network On March 3, 2010 · Add Comment · In Uncategorized

The Department of Public Safety may have to put extra security around the artwork in the Texas capitol. Borris Miles is so far winning back his state rep seat in Houston by 11 votes, so unless there is a recount he has won. He lost his bid for re-election in 2008. He is the “art critic” who took down two paintings from our death penalty art show in the capitol in 2007. Actually, he is a progressive who supports a moratorium on executions, he is just not so smart about art. Maybe he has learned his lesson after losing his re-election bid in 2008 that he can’t just go around taking other peoples’ property and putting it in his office.

As he walked with his young children through the Texas Capitol in Austin this week, state Rep. Borris Miles stopped short in front of an unfamiliar painting: It showed a black man hanging from a tree by a rope — part of an art exhibit organized by a group opposed to the death penalty.

Miles scanned the other images and spotted a black-and-white rendering of a man tied to an electric chair. “Doing God’s Work,” read the title.

“I was shocked. It was appalling,” said Miles, a Houston Democrat. The legislator, who is African American, immediately took down both pieces, placed them in his office and directed his staff to find out who was responsible for the display.

“I’m not an art critic or an art hater, but I can’t think of any circumstance where hanging this type of art would be appropriate. It’s offensive,” Miles said. “It has no place at the Capitol.”

The artwork, some by prisoners on death row, is part of an exhibit organized by the Texas Moratorium Network, which advocates a two-year moratorium on the death penalty. The show was intended to “engage the public and get them to discuss death penalty issues,” president Scott Cobb said. “From that perspective, we’re grateful to [Miles] for taking it down, because now it’s wall-to-wall people wanting to see what the controversy is about.”

The State Preservation Board schedules exhibits at the Capitol that serve a “public purpose” and are sponsored by an elected official, spokeswoman Julie Fields said. “We look at this as a free-speech issue. We don’t police content,” she said.

Miles wants the panel — made of up of five elected officials and one private citizen — to amend the “process for selecting exhibits…. We need procedures for what goes on display.” Cobb said he’ll meet with Miles — who supports a moratorium on executions — before the exhibit closes on Saturday. “I’ll ask him to talk to the preservation board first if a piece of art offends him in the future,” Cobb said. “We would like that a precedent is not set that anybody can go around taking down things at the Capitol that they object to. He probably overreacted.”

Below is one of the art works that Miles illegally took down and put in his office. 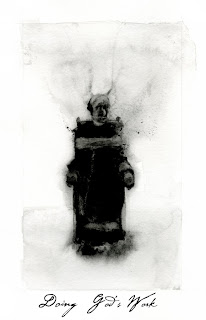