By Texas Moratorium Network On March 10, 2010 · Add Comment · In Uncategorized 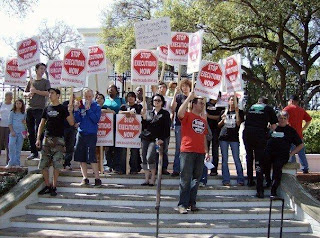 Join us March 15-19, 2010 in Austin, Texas for the award-winning Anti-Death Penalty Alternative Spring Break. Everyone is welcome. You can attend all events or just the ones that interest you.
It starts at 4:30 PM on Monday, March 15. The location is the Jesse H. Jones Communication Center – CMA room 3.112 on the campus of The University of Texas at Austin. CMA is on the corner of Whitis Avenue and Dean Keeton, (Google Map). The room is located on the entrance level of the building.
Special guests will be six innocent death row exoneress: Shujaa Graham, Curtis McCarty, Ron Keine, Derrick Jamison, Perry Cobb and Juan Melendez.  They are attending alternative spring break to speak with participants about how innocent people can end up on death row. Altogether, the six exonerees attending the alternative spring break spent a total of about 65 years on death row for crimes they did not commit.

It’s free, except for a $25 housing fee for those who need us to arrange housing for you. We will house you in a shared room with other spring breakers in either a hotel or dorm. You are responsible for your travel, food and other expenses, but the program and most of the housing costs are on us. The $25 housing fee is all you pay. Register here.