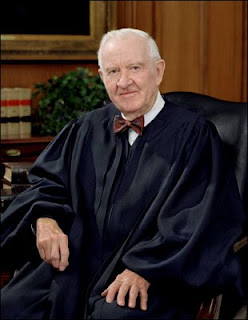 The Atlantic has an article (“When Theories Fail“) that uses Justice John Paul Stevens as an example of how people can re-evaluate their positions on strongly held views in light of new and changing evidence. Stevens was appointed by a Republican president and he co-wrote the opinion in 1976 that reinstated the death penalty, but over the years he changed his opinion on the death penalty and decided it was a failed public policy. This is exactly the type of approach that Texas Moratorium Network takes in its advocacy for a moratorium on executions. The system is broken and it is good public policy to halt executions while the state sets up a Texas Capital Punishment Commission to conduct a comprehensive evaluation of the death penalty system.

We have also seen other people recently who in the past were strong supporters of the death penalty and now have become strong critics, such as former Texas Governor Mark White and former Bexar County District Attorney Sam Millsap.

In all the reminiscing and analysis that’s emerged following Supreme Court Justice John Paul Stevens’ retirement announcement last Friday, the piece that’s intrigued me the most is the explanation of how Stevens came to change his views on the death penalty over the course of his tenure on the court.

Linda Greenhouse, a former Supreme Court correspondent for The New York Times noted that Stevens had renounced his support for the death penalty two years ago “in an opinion based not in abstract principle but in years of sorrowful observation of how the death penalty was actually being administered.” Stevens, she said, had come to the conclusion that “the premise that the justices had assumed in 1976, that the death penalty could be rational and fair, had gone unfulfilled,” and it was now time to reconsider “the justification for the death penalty itself.”

The justices had been operating on a theory that, at least in Justice Stevens’ opinion, the messy reality of life had not matched. And so he came to change his opinion about the theory.

That is, of course, what all good scientists are supposed to do. We develop theories, and then we test them, or see how they play out in real life. If reality doesn’t behave the way the theory predicted, we’re supposed to use that information to modify and improve our theories and opinions. What makes that anecdote about Stevens notable is how few public figures — or even private individuals, for that matter — manage that kind of measured re-evaluation of their beliefs or positions, despite how often our theories about business, economics, foreign policy or human behavior prove themselves less perfect in practice than they sounded on paper.

Three of the hardest words for anyone to utter are “I was wrong.” But they’re also a necessary first step in coming up with a better theory, approach, or solution. It can be wrenching for a scientist to realize that his or her prized theory, which he or she has spent years gaining status and benefits from pursuing and advocating, is flawed, wrong, or doesn’t really work in real life conditions. And scientists don’t generally have to face, in the course of acknowledging the flaws of their theories, irreparable damage done — innocent men executed, an industry grievously damaged, or millions of people left without jobs, houses, or retirement savings.

But as Stevens, Zoll and others have demonstrated, it can be done. In fact must be done, if truth, justice, sustainable solutions, or long-term success are ever to be achieved. Of course, perhaps Rubin, Greenspan and some of the others on Wall Street arguing that they weren’t really responsible and nothing needs to change truly believe their words, and still believe in their theories. More likely, I suspect that they just still want to believe in them. They like those theories. Those theories worked well for them.

And perhaps, given some more time, they’ll come around. Justice Stevens, after all, had over 30 years to re-evaluate his initial positions, assumptions, and theories. But if Stevens seems to stand a bit taller than the Wall Street wizards do at the moment, it’s not the black robe or title. It’s his ability to say “I was wrong. My assumptions did not play out in real life the way I thought they would. And so I am now advocating a different approach.” The titans of Wall Street — and, indeed, all of us — would do well to take a few notes.