Sign Email Petition: "I support public meetings of all committees of the Texas Forensic Science Commission" Contact Rick Perry to Protest Scheduled Execution of 454th Person in Texas and 215th Under Perry

By Texas Moratorium Network On April 25, 2010 · Add Comment · In Uncategorized

Rick Casey of the Houston Chronicle writes in his column today about a Republican judge in Houston who jailed the wife of a defendant who had just been acquitted of murder for reacting to the acquittal with relief. Judge Susan Brown of Houston’s 185th Criminal Court  (see photo left), whose insensitivity and callousness brings to mind Judge Sharon Keller, is being opposed in the November election by Democrat Vivian King.

Last week she warned everyone in the courtroom not to react in any way when the verdict was read after a four-day murder trial.
When the jury pronounced the defendant “not guilty,” the defendant’s wife nevertheless reacted with some combination of relief and delight.
The judge gave her three days in jail for contempt.
How sensitive? Judge Brown said the woman was “screaming and flailing and yelling,” adding she had “never seen anything quite like it.”
But four other witnesses described it differently.
The defendant, the defense attorney and two jurors had varying memories. One heard the woman say, “Thank God.” One heard her say, “Amen.” Two heard a brief scream or squeal. None saw her flailing about.
I’m not naming the defendant or his wife because her co-workers aren’t aware her husband was accused of murder, and I think she need not be punished further.
The defendant had been in jail awaiting trial for about 18 months, so it was considerable relief to his wife when he was found not guilty.
“I think my wife said, ‘Amen.’ She said it one time,” the defendant said.
“She was crying when they took her off to jail. She don’t eat meat, so she couldn’t eat the food they gave her.”
Though she was sentenced to three days, she was let out after 36 hours, spending Thursday and Friday nights in jail.
Tyrone Moncriffe, the defendant’s attorney, remembered the woman as saying “Thank God.”
“She had been under a lot of stress and strain for almost two years,” said Moncriffe, a veteran defense attorney who is board-certified in criminal law.
He said he’d never seen a judge jail someone for such behavior.

Juror Mark Enns said he heard the woman make a noise “like a quick squeal.” He said his view of her was partly blocked, but he didn’t see any flailing about.
When I told him the woman was the defendant’s wife and had been sent to jail, he said, “Oh hell. 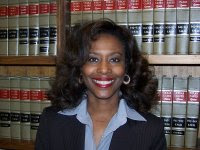 “It wasn’t an angry thing,” she said of the wife’s outburst. “Every black preacher teaches us to thank the Lord.”

King, who like the wife is African-American, said of Brown’s action, “I don’t think it was racism, just a lack of cultural understanding.”