Austin Police Association Charters Bus to David Powell Execution, But Not All Austin Police Agree He Should Be Executed After 32 Years Press Conference with David Powell’s Attorney and Family Members at Texas Capitol Wednesday June 9 at Noon

By Texas Moratorium Network On June 7, 2010 · Add Comment · In Uncategorized 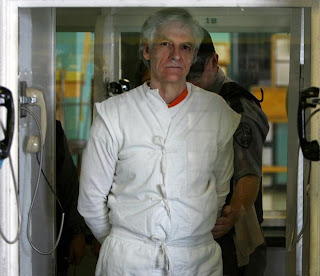 The decision on clemency will be made soon from the Texas Board of Pardons and Paroles, which can be contacted using the email address: bpp-pio@tdcj.state.tx.us

Once again, we all must ponder the most serious power the state grants itself, the authority to take a life.

Barring unanticipated intervention by the courts or state officials, David Lee Powell will be executed June 15 for gunning down Austin police officer Ralph Ablanedo in 1978.

The crime was an unconscionable, unforgiveable act by a UT dropout whose promising young life was sidetracked when he got into using and dealing drugs. Now, 32 years and three trials later, Austinites again should remember and mourn the death of Ablanedo, the father of two young sons when Powell killed him.

And, also because 32 years have passed, Texans again should weigh the death penalty to see if it is equitably meted out. We do not believe it is. And we believe this case — as heinous as they come — shows why life without parole is a fairer option as the ultimate punishment.

In order to recommend a death sentence, jurors must decide “there is a probability that the defendant would commit criminal acts of violence that would constitute a continuing threat to society” inside or outside of prison.

The law requires jurors to predict the future. Prosecutors often help by bringing in expert psychiatric testimony. It can be from experts who never examined the defendant.

The Powell case — because of the lag between crime and punishment — shows us how jurors can ultimately be proven wrong. As the American-Statesman’s Chuck Lindell and Tony Plohetski reported Sunday, Powell supporters note he has led something of an exemplary life during his many years behind bars, picking up only minor rules infractions while also aiding other inmates. At his 1999 retrial, four guards and a supervisor testified that Powell was no problem in prison. Veteran guard Mark Morrow said Powell was “very quiet, always well-mannered. Not a troublemaker, by any means.”

Psychiatrist Seth Silverman of Houston, who treated Powell in recent years and said the inmate responded well to psychotherapy, reported in an affidavit that Powell poses “virtually no risk” of future violence. Silverman also included stats showing how the passage of time decreases the probability of problems with the law: Arrest rates fall 90 percent from age 20 to age 60. Powell is 59.

The passage of time is what makes the Powell case so instructive. There’s never been a Texas case with a longer lag between offense and execution. And it is that passage of time that raises important questions about the death penalty.

We do not believe Powell should ever draw a breath outside of prison bars. But we do believe his case highlights problems with the death penalty.

It also is a case in which we agree with much of what has been said on all sides.

“Thirty-two years ago, I was responsible for an enormously evil act,” Powell told the Statesman, ” … and no apology I could give would be powerful enough to express my regret for that. But every person is more than the worst thing they have ever done, and I am no exception.”

Judy Mills, Ablanedo’s widow, said this is “one of those things where nobody wins.”

“He will be put to death, and Ralph will still be gone. It’s not about feeling better. There is nothing to feel good about,” she said.

Bruce Mills, now married to his ex-partner’s widow, said. “I don’t think it is about deterrent. It is about retribution.”

Properly administered, life without parole can serve the same function.