By Texas Moratorium Network On September 3, 2010 · Add Comment · In Uncategorized 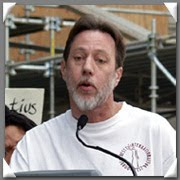 Greg Wilhoit is an innocent man who spent five years of his life on death row for a crime that he did not commit. He received a full exoneration in 1993. On October 30, 2010, Greg will be at the Texas Capitol for the 11th Annual March to Abolish the Death Penalty. The march starts at 2PM. He is coming as part of the Journey of Hope … from Violence to Healing, which has proclaimed October 30, 2010 “Greg Wilhoit Day”.
The Journey of Hope is an organization led by murder victim family members joined by death row family members, family members of the executed, the exonerated, and others with stories to tell, that conducts public education speaking tours and addresses alternatives to the death penalty. They will be touring Texas telling their stories in cities across the state from October 15-31.
“At the sentencing,” Wilhoit said, “the judge told me I was to die by lethal injection. Then he said, ‘But if that fails, we’ll kill you by electrocution. If the power goes out, we’ll hang you. If the rope breaks, we’ll take you out back and shoot you.’”
On June 1, 1985, Greg’s wife Kathy was brutally murdered in Tulsa, Oklahoma, leaving Greg to raise two little girls 4 months and 14 months old. Almost a year later Greg was arrested and charged with Kathy’s murder because two dental “experts”, one of whom had been out of dental school less than a year, testified that a bite mark found on Kathy’s body matched Greg’s teeth.
Greg’s parents hired an attorney who had a reputation as one of the top defense attorneys in Oklahoma to represent him. Unfortunately, in the preceding years the attorney had become an alcoholic and had developed alcohol-related brain damage. He embodied the definition of an incompetent attorney and did no preparation whatsoever for Greg’s trial. He appeared in court drunk, threw up in the judge’s chambers, and literally put on no defense. Greg was consequently found guilty and sentenced to death.
Greg was assigned an attorney, Mark Barrett, from the Oklahoma Indigent Defense System to handle his appeal. Barrett was convinced of Greg’s innocence and worked tirelessly for over 4 years to help correct a terrible wrong. The 12 top forensic odontologists in the country examined the bite mark evidence and all 12 testified that the bite mark could not possibly be Greg’s. Greg was eventually granted a new trial and was out on bail for two years while the District Attorney decided whether or not to retry the case. A second trial was held in 1993, but after the prosecution presented their case (without the bite mark evidence) the judge issued a directed verdict of innocence and Greg was cleared of all charges.
Greg lost 8 years of his life, the opportunity to raise his two daughters, his livelihood, and his physical and mental health. He now lives off social security checks because he continues to suffer from Post Traumatic Stress Disorder. He has never received an apology or one penny in compensation. In 2003, the Oklahoma Legislature voted overwhelmingly to award exonerated inmates $200,000 for their time served in prison. However, Greg has yet to receive any compensation. Greg is trying to get on with his life, but it’s not easy to get over the nightmarish trauma of those eight years.
Greg was recently featured in John Grisham’s latest book, “The Innocent Man” (Grisham’s first non-fiction book), and travels across the country active in the movement against the death penalty, speaking to numerous universities, schools and other audiences about his experience as a survivor of death row.
Greg today lives in Oklahoma. He is engaged to get married on Sept 18th to his fiancée Judy. They have known each other for 25 years.
Greg will join other innocent death row exonerees who will be attending the 11th Annual March to Abolish the Death Penalty, including his fellow Oklahoma exoneree Curtis McCarty, as well as Ron Keine and Shujaa Graham. Curtis spent 21 years in prison – including 19 years on death row – in Oklahoma for a crime he did not commit. Shujaa spent 3 years on death row in California for a crime he did not commit. Ron spent two years on death row in New Mexico for a crime he did not commit.
The annual march is organized by several Texas anti-death penalty organizations, including Texas Moratorium Network, the Austin chapter of the Campaign to End the Death Penalty, the Texas Death Penalty Abolition Movement, Texas Students Against the Death Penalty, Texas Death Penalty Education and Resource Center, Death Penalty Free Austin, and Kids Against the Death Penalty.