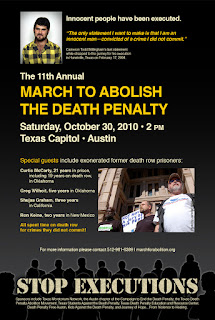 Tonight October 21 at 7 pm in Austin, we will have the last organizing meeting for the Oct 30th 11th Annual March to Abolish the Death Penalty. Everyone is welcome to come. This will be the final planning meeting before the event itself, although we will likely schedule a work party for one day next week to prepare materials for the march.
March Planning Meeting
Thursday, October 21 at 7PM
Friends Meeting House – in the Little House in rear of complex.
3701 East MLK, just east of E.M. Franklin Ave.
Special guests this year include 6 exonerated former death row prisoners Shujaa Graham, Ron Keine, Gary Drinkard, Curtis McCarty, Albert Burrell and Greg Wilhoit. Curtis spent 21 years in prison – including 19 years on death row – in Oklahoma for a crime he did not commit. Shujaa spent 3 years on death row in California for a crime he did not commit. Ron spent two years on death row in New Mexico for a crime he did not commit. Gary spent almost 6 years on death row in Alabama for a crime he did not commit. Albert spent 13 years on death row in Louisiana for a crime he did not commit. Greg spent five years on death row in Oklahoma for a crime he did not commit.
Also speaking will be Ron Carlson, whose sister Deborah Ruth Carlson Davis Thornton and Jerry Lynn Dean were murdered in Houston with a pick-ax by Karla Faye Tucker and Daniel Ryan Garrett. Ron opposes the death pealty and witnessed Tucker’s execution in Huntsville at her request. Other speakers will be announced later.
Elizabeth Gilbert will also speak at the 11th Annual March to Abolish the Death Penalty at 2 PM on October 30th at the Texas Capitol in Austin. She is a Houston teacher and playwright who befriended Texas death row prisoner Todd Willingham. Her story is featured in the New Yorker article by David Grann about the case as well at the Frontline Documentary “Death by Fire” (Click to watch online). Elizabeth actively investigated the case on her own. She became convinced of Todd’s innocence and was instrumental in helping his family find an expert fire investigator to examine his case.
“This is fast becoming one of the biggest anti-death penalty events in the country. I’ll be there“, said death row exoneree Ron Keine.
Each October since 2000, people from all walks of life and all parts of Texas, the U.S. and other countries have taken a day out of their year and gathered in Austin to raise their voices together and loudly express their opposition to the death penalty. The march is a coming together of activists, family members of people on death row, community leaders, exonerated prisoners and all those calling for repeal of the Texas death penalty.
Last year’s march was the largest anti-death penalty rally in Texas since the first ever march in 2000. We will be joined this year by the Journey of Hope, which is an organization led by murder victim family members joined by death row family members, family members of the executed, the exonerated, and others with stories to tell, that conducts public education speaking tours and addresses alternatives to the death penalty.
Todd Willingham was an innocent person executed by Texas. The Texas Forensic Science Commission has admitted that the science used to convict Todd Willingham was “seriously flawed”.
Sharon Keller, the presiding judge of the Texas Court of Criminal Appeals, was issued a “Public Warning” for judicial misconduct for saying “we close at 5″ on the day of a person’s execution instead of accepting an appeal from his lawyers.
There are people on death row who did not kill anyone or intend for anyone to be killed, but who were convicted under the “Law of Parties”.
The annual march is organized as a joint project by several Texas anti-death penalty organizations: Texas Moratorium Network, the Austin chapter of the Campaign to End the Death Penalty, the Texas Death Penalty Abolition Movement, Texas Students Against the Death Penalty, Texas Death Penalty Education and Resource Center, Death Penalty Free Austin, and Kids Against the Death Penalty.