By Texas Moratorium Network On January 6, 2011 · Add Comment · In Uncategorized

One man is already dead, and many more to come, as a result of pharmaceutical company Dream Pharma’s pursuit of profit; Reprieve proposes a ‘Hippocratic Oath’ for ethical pharmacies.

Dream Pharma is exposed today as the UK source of all three drugs used to execute prisoners in the US. Reprieve releases documentary proof that the Acton-based company sold the drugs to Arizona that were used in the execution of Jeffrey Landrigan on October 26th, 2010, and that will send many other prisoners to their deaths. 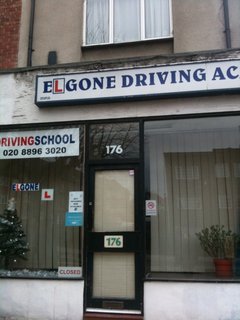 Dream Pharma Ltd, of 176 Horn Lane, London W3 6PJ, is a pharmaceutical company run by Matt Alavi. It operates out of the back of a driving instructor’s office, Elgone Driving Academy, pictured right.

Mr Alavi sold 150 vials of sodium thiopental, 180 vials of potassium chloride, and 450 vials of pancuronium bromide to the Arizona State Prison on September 28th, 2010. This was sufficient to execute at least ten prisoners, and one has already died as a result. The sodium thiopental was sold for £1,180.50, a mark-up of roughly 1000% over the normal price in the US. The State of Arizona sought permission from the state supreme court on December 28th to go forward with the next prisoners in line for execution.
Reprieve can also reveal today that before Arizona, the State of Arkansas bought drugs from the UK, though the precise quantity is not yet known. Furthermore, as of two days ago, an additional 1,042 vials of sodium thiopental (sufficient to execute 85 prisoners) were released to California by the US Food & Drug Administration (FDA), after importation from the UK. This is all thought to have been sourced from Dream Pharma, although the company has declined to confirm the fact, or produce the invoices. Various other states’ recent purchases of execution drugs from the UK remain secret.
Reprieve has written to Dream Pharma twice, and met with Alavi once; Dream Pharma has refused all cooperation with Reprieve’s efforts to mitigate the damage caused by these sales.
Meanwhile, the government has acted with unacceptable sloth. A month after Reprieve’s original request, and only when pressed by litigation, Business Innovation and Skills Secretary Vince Cable banned the export of sodium thiopental in late November. Reprieve gave Cable notice on December 16th that a UK company had exported two other execution drugs (pancuronium bromide and potassium chloride) to the US, and called on him to impose an immediate export ban on them as well. The BIS has yet to act. Neither did the BIS apparently act on Reprieve’s request – made on December 7th – to intervene to ensure that the British drugs were not released to California by the US FDA. The FDA announcement on January 4th reveals that any intervention by Cable will now be too late.
Meanwhile, Reprieve has called upon various pharmaceutical companies to assist in the task of preventing their drugs from being used to kill people. Thus far, the response has been anaemic, suggesting that the companies’ commercial interests override any legal or ethical obligations. Hameln has been the only exception, taking urgent action to ensure that its drugs would not be used for executions. In sharp contrast, Hospira has specifically stated its opposition to a ban, and has refused any assistance from Reprieve in repairing the damage done by the exportation of these drugs.
Reprieve condemns the irresponsible attitude taken by most pharmaceutical companies and calls upon them to voluntarily establish an industry Hippocratic code asserting that their drugs should be used only for the benefit of patients, not for executions.
Reprieve’s Director Clive Stafford Smith said:

“It is shocking that Britain has allowed a fly-by-night company in the back of a driving academy to export sufficient drugs to take many lives. The manner in which dangerous pharmaceuticals have been shuffled around without any controls points to a far deeper problem.
“Dream Pharma has sadly chosen a rather inappropriate name, unless it refers to Hamlet: ‘for in that sleep of death what dreams may come?’
“Our purpose is not to persecute Dream Pharma, but to ensure that they help us repair the damage that they have caused. This they resolutely refuse to do. Dream Pharma asserts that selling these drugs was no different from selling a hammer in a hardware shop. The analogy is apposite only if we include one fact: the customer told the salesman that he planned to bludgeon someone to death with it outside the store.
“Dream Pharma’s tentative assertion to the media that they did not know the drugs were to be used for executions is simply false. The three drugs they sold to the Arizona State Prison are the three drugs used for lethal injection, and the emails back and forth make it clear that they knew precisely what they were doing. Indeed, Mr Alavi made it clear to Reprieve that he favoured capital punishment. Sadly, the profit was blood money, pure and simple.
“Vince Cable has been sitting on his hands on this issue. If he is really against the death penalty, his office needs to read urgent requests for help in less than the two weeks it took here, and then act with urgency.”

Reprieve, a legal action charity, uses the law to enforce the human rights of prisoners, from death row to Guantánamo Bay. Reprieve investigates, litigates and educates, working on the frontline, to provide legal support to prisoners unable to pay for it themselves. Reprieve promotes the rule of law around the world, securing each person’s right to a fair trial and saving lives. Clive Stafford Smith is the founder of Reprieve and has spent 25 years working on behalf of people facing the death penalty in the USA.
Reprieve’s current casework involves representing prisoners in the US prison at Guantánamo Bay, working on behalf of prisoners facing the death penalty, and conducting ongoing investigations into the rendition and the secret detention of ‘ghost prisoners’ in the so-called ‘war on terror.’
Reprieve
PO Box 52742
London EC4P 4WS
Tel: 020 7353 4640
Fax: 020 7353 4641
Email: info@reprieve.org.uk
Website: www.reprieve.org.uk
Reprieve is a charitable company limited by guarantee; Registered Charity No. 1114900 Registered Company No. 5777831 (England) Registered Office 2-6 Cannon Street London EC4M 6YH; Patrons: Alan Bennett, Julie Christie, Martha Lane Fox, Gordon Roddick, Jon Snow, Marina Warner