By Texas Moratorium Network On July 20, 2011 · Add Comment · In Uncategorized 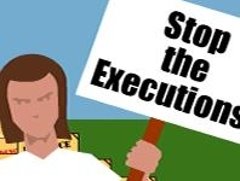 Help stop today’s execution in Texas of Mark Stroman! Call Rick Perry today at 512 463 2000 and urge him to listen to Stroman’s lone surviving shooting victim Rais Bhuiyan and Stop the Execution of Mark Stroman. Bhuiyan is fighting to stop the execution. You can join the fight too with a phone call of less than 60 seconds.