By Texas Moratorium Network On November 7, 2011 · Add Comment · In Uncategorized 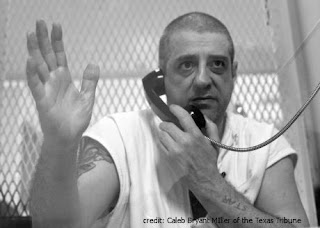 CONTACT: Justice4Hank, Gilles Denizot justice4hank@gmail.com
OVER 130,000 ASK GOVERNOR PERRY TO STOP HANK SKINNER’S EXECUTION
AND DEMAND DNA TESTING.
Hank Skinner, a man on death row in Texas since 1995 who has consistently maintained his innocence, is set to be executed on November 9 despite untested key evidence in his case.
HOUSTON, TEXAS – In less than two days, more than 130,000 people called on Texas Governor and presidential candidate Rick Perry to stay the execution and test the evidence in the murder case of Hank Skinner, who is set to be executed on November 9.
On November 4, Justice4Hank, a coalition of family and supporters of Skinner, delivered 16,000 signatures (more than half of which stemming from Texans voters) to Gray County D.A. Lynn Switzer, urging her to reconsider her position in this case and to grant Mr. Skinner the DNA testing he has been seeking for a decade. There has been no reaction from Ms. Switzer’s office.
In a declaration under oath, filed on July 21, 2011, Gray County D.A. Lynn Switzer stated:
“…At least some of the evidence that Skinner seeks for testing still exists and is in my custody, such as Twila Busby’s vaginal swabs and fingernail clippings. That evidence is either at GeneScreen or in the evidence locker at the Gray County Sheriff’s Department. I have not sought expert opinion on that question…”
Ms. Switzer clearly confirms that the chain of custody she is responsible for has not been maintained and she also admits to be in possession of only two pieces of evidence. As for the rest of the evidence, she does not know where it is located or whether it still exists.
Less than 7 days later, on July 27, 2011, the sentencing judge, Judge Emmert, signed a new death warrant for November 9, 2011, although the courts had to be fully aware that Mr. Skinner’s attorneys would file a new DNA motion as soon SB 122 became applicable.
On November 2, without any explanation, Judge Emmert denied the new motion for DNA testing. This decision is currently on appeal with the Court of Criminal Appeals in Austin.
Immediately after, more than 85,000 added their names on a new petition asking Governor Perry to withdraw the execution warrant and to grant DNA testing to Mr. Skinner.
In May 2011, the Texas legislators approved new standards for crime labs, compensation for the exonerated and revised statutes for post-conviction DNA. Gov. Perry signed those bills into law to improve and scrutinize a criminal justice system in need of reform. Considering that DNA testing has exonerated 275 prisoners in the United-States since 1989, including 43 in Texas, the overwhelming vote, both in the House and the Senate, in favor of the revised post-conviction DNA statute certainly was a welcome addition to the ongoing reforms Gov. Perry is promoting.

Governor Perry signed SB 122 into law on June 17, 2011. This bill is intended to ensure that if DNA evidence is available to prove someone’s innocence, it can and will be tested. This revised post-conviction DNA law was authored and sponsored by legislators who strongly supported the bill for cases like Hank Skinner’s who is set for execution on November 9, 2011. Senator Ellis, who authored the bill, stated in an interview this week that he does not understand how the court could continue to deny Mr. Skinner’s request, which he said his recent legislation would allow.

Gov. Perry, who has presided over 237 executions since taking office in 2001, must ensure that the criminal justice reforms he supports be implemented. In this respect, 17 former and current Texas elected officials as well as 27 exonerees have sent letters to Governor Perry to express their serious concerns about the lack of justice in Mr. Skinner’s case. While Rick Perry campaigns for the GOP presidential nomination, Justice4Hank urges him to do the right thing for justice and for the truth in Texas, before it is too late.

Live signature totals from Justice4Hank’s campaign: http://chn.ge/HankSkinner
Timeline:
All legal documents quoted below are available in the “Legal Documents” section of the website at http://www.hankskinner.org