By Texas Moratorium Network On September 11, 2006 · Add Comment · In Uncategorized 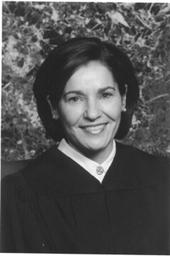 From The Houston Press

We love a good MySpace parody. Why, just check out ours here, and here. So we think this fake page belonging to Dallas judge Sharon Keller, who’s seeking re-election as presiding judge for the Texas Court of Criminal Appeals against J.R. Molina, is pretty damn funny.

But Keller doesn’t, and complained to the now Fox-owned MySpace folks, who promptly removed it. (She’s apparently pissy about being called “Killer.”) It’s up again, for now, but chances are it will be gone by week’s end.

For anyone who has even casually followed Texas death penalty rulings, the site’s a hoot-and-a-half. Keller gained notoriety when she ruled in 1998 that convicted rapist and murderer Roy Criner couldn’t get a new trial, even though new DNA evidence refuted the original blood evidence that essentially built the case against him. (Criner was eventually pardoned by then Governor Dubya, after serving 10 years of a 99-year sentence for the rape of a 16-year-old in Montgomery County.)

And thus, the tune playing on her MySpace page is Vicky Lawrence’s cheesy – but entirely apropos – classic “The Night the Lights Went Out in Georgia” (a song about an innocent man getting nailed by the system). Arguably the best pic in her scrolling image set is of her with a group of women, holding a big check (because nothing says politico like a big check).

Her blogs are priceless, especially the one titled “20 Hamburgers You Must Eat Before You Die.” The judge cites a piece in Esquire on the nation’s best hamburgers, one of which can be found at the judge’s dad’s Dallas joint , Keller’s Drive-In. Sez the Judge:

According to the article, “the hamburger is a symbol of everything that makes America great. Straightforward, egalitarian, substantial, and good-natured, it is also a little bloody at times”.

Isn’t that hilarious? It describes me exactly, straightforward and a little bloody. FATFLOL. I wonder if anyone I helped get executed in Texas ever made a last request of a Keller’s Drive-in burger. They should, it’s bloody good, but they probably can’t anyhow. A little known secret is that the last meal in Texas is not anything you want. It’s whatever they have in the prison kitchen that comes close to being what you want. And if you order, “Justice” as your last meal, like a smartass, well, then you just die, er I mean go to sleep, hungry.

FATFLOL? Emoticons? The verdict is in. This political satire, which is sure to be nixed by Rupert Murdoch’s goons, is awesome. – Steven Devadanam