We attended the DVD release party of “Incendiary: The Willingham Case” tonight at the Violet Crown in Austin.


INCENDIARY follows a tragic tale that started with a 1991 house fire that resulted in the deaths of Cameron Todd Willingham’s three daughters in a Corsicana, Texas.  Convicted largely on faulty arson evidence, Willingham was sentenced to death for the murder of his children.  Despite overwhelming expert criticism of the prosecution’s “junk science,” he was executed in 2004.  Subsequent investigations of the case landed the Willingham case into the national spotlight, made brighter and more intense by the presidential campaign of Texas Governor Rick Perry.
Equal parts murder mystery, forensic investigation and political drama, INCENDIARY explores both the intricate arson forensics surrounding the case and the polarized public responses to Willingham’s execution.  Co-directors Steve Mims and Joe Bailey Jr. bring a unique combination of filmmaking and legal backgrounds to the film.
“It’s a riddle and a brainteaser of a film that asks you to figure out who is telling the truth and why,” said Mims.  While Willingham’s death has become a call for reform in forensics and a rallying cry for the anti-death penalty movement, he remains an indisputable “monster” in the eyes of Governor Perry, who ignored the science that could have saved Willingham’s life.
“We set out to make a film that sticks to the facts of the original event and the scientific evidence surrounding the case,” said Bailey.  “We had no other cause.  But with the inevitable injection of politics into the story, the film needed to pull back the curtain on some rough and ready political hardball.”
Winner of the 2011 Louis Black South by Southwest Award, INCENDIARY garnered critical acclaim in limited theatrical release.  Anne Hornaday of the Washington Post wrote: “Nonfiction filmmaking at its most classic.  Crime, punishment, morality and hardball politics make for an explosive narrative mix all their own.” “Alarming viewing for anyone who cares about the American justice system,” wrote Sheri Linden for the Los Angeles Times.  Art Levine of the Huffington Post called INCENDIARY:  “A gripping, visually stunning indictment of a miscarriage of justice as great as that chronicled in Errol Morris’s groundbreaking THE THIN BLUE LINE.”
INCENDIARY:  THE WILLINGHAM CASE is available for rental or purchase on Apple’s iTunes store and on DVD via incendiarymovie.com.
For more information on INCENDIARY and the Willingham case, visit INCENDIARYMOVIE.COM. 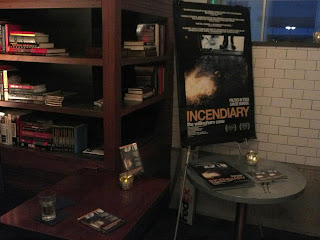