By Texas Moratorium Network On January 26, 2011 · Add Comment · In Uncategorized

The Texas legislators who filed or signed on as co-authors to the death penalty abolition bills in 2009 were Harold Dutton, Jessica Farrar, Terri Hodge, Marisa Marquez, Lon Burnam and Al Edwards. (Hodge and Edwards are no longer members of the Legislature in 2011).

By Texas Moratorium Network On January 24, 2011 · Add Comment · In Uncategorized

Many people and some newspapers have criticized the Texas Forensic Science Commission for carrying on much of its discussions about the Todd Willingham case behind closed doors, either when the subcommittee meets or during executive sessions of the full committee. At last Friday’s meeting on Jan 21, the Commission again went behind closed doors for about an hour. When they returned they decided to seek an opinion from the Texas Attorney General about whether the Commission has jurisdiction in the Willingham case.

Here is a video of Chair John Bradley announcing the Commission will go behind closed doors to confer outside the view of the public.

By Texas Moratorium Network On January 20, 2011 · 1 Comment · In Uncategorized 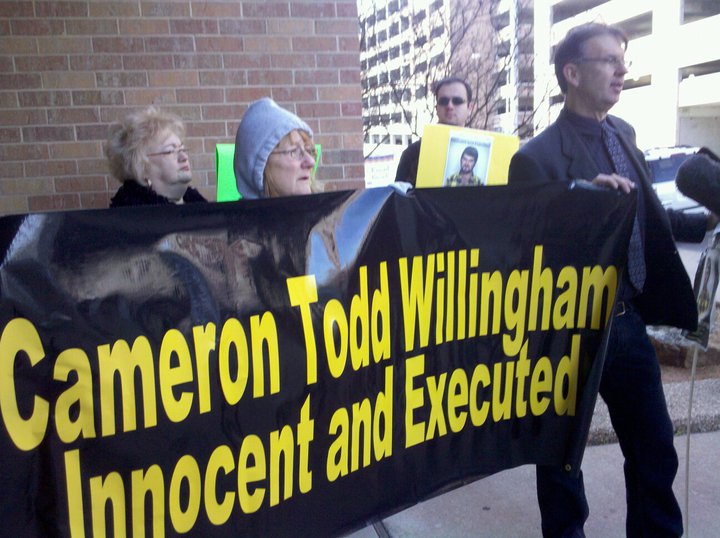 The Texas Forensic Science Commission will meet, Friday, January 21, 2011 in Austin. The third item on the agenda is to ““Consider Willingham/Willis case (Complaint #09-01) and assign report“. The hearing starts at 9:30 AM, but we plan to be outside the building at 8:30 AM for a demonstration in support of relying on science and not politics in the case of Todd Willingham.

The hearing is in the Central Services Building, 1711 San Jacinto Boulevard Room 402 in Austin. We will go inside before the hearing starts. RSVP on the Facebook event page.
Before his execution, Todd Willingham said, “Please don’t ever stop fighting to vindicate me.”

Grievance Filed Against Sharon Keller with State Bar of Texas

By Texas Moratorium Network On January 19, 2011 · Add Comment · In Uncategorized
From the San Antonio Express-News:

A civil rights group is asking the state to revoke the law license of a judge who has been a lightning rod in debates over the death penalty.
The Austin-based Texas Civil Rights Project filed a grievance Wednesday with the State Bar of Texas against Justice Sharon Keller, the presiding judge of the Court of Criminal Appeals, saying she is unfit to retain her license to practice law. Records show Keller has been licensed since graduating from SMU’s law school in 1978.
The group alleges she is untrustworthy and dishonest, citing:
A review by the Texas Ethics Commission that found she failed to disclose several sources of income, as required by law.
Her refusal in 2007 to keep the court open after 5 p.m. at the request of lawyers drafting an appeal on behalf of death row inmate Michael Richard, who was executed that evening.
Statements she made in a federal lawsuit filed by Richard’s widow that purportedly contradict what she told the State Commission on Judicial Conduct.
Keller, who recently said she’d seek reelection in 2012, had no comment. Her lawyer, Chip Babcock, could not be reached for comment Wednesday.
The state Commission on Judicial Conduct, which publicly warned her after investigating her actions on the day Richards was executed, also had no comment.
In April, the Texas Ethics Commission fined Keller a record $100,000 for failing to report stock, honoraria and more than $2.4 million in real estate holdings on her 2007 and 2008 personal financial disclosure statements. Keller filed amended reports with the commission in 2009 after news reports revealed her missing holdings.
In a statement filed with the amended reports, Keller said her father made investments for her and her son without her knowledge.
In 2009, the judicial conduct commission filed misconduct charges against Keller and issued her a “public warning.” The disciplinary body said she brought discredit to the judiciary by closing the court to Richard’s appeals in 2007 just hours before he was executed.
In October, a special panel of three Republican judges said the commission issued her the wrong discipline, but the panel did not set aside the commission’s misconduct findings.
Richard’s widow, Marsha Richard, sued Keller in federal court in Austin in 2007. Keller argued that she acted in her judicial capacity in refusing to keep the courthouse open for Michael Richard’s appeal, which made her immune to a lawsuit. U.S. District Judge Lee Yeakel dismissed the case in 2008.
But in front of the judicial conduct commission, Keller claimed she had acted in an administrative capacity, not in a judicial role.
“As the documents included in the grievance demonstrate, Judge Keller’s statements before the federal court and her statements to the (conduct) commission were in complete contradiction of each other,” said Jim Harrington, executive director of the Texas Civil Rights Project. “The important thing is she was under oath for both.”
Marsha Richard’s lawyer, Randall Kallinen, said Keller wrongly used the two hats to her advantage, and her credibility suffered.
“Judges should not be allowed to argue two opposite positions in two different tribunals to their advantage because it erodes the people’s confidence in the judiciary,” Kallinen said. “It contradicts the public’s perception of fairness towards all parties regardless of the party’s high status.”

By Texas Moratorium Network On January 16, 2011 · Add Comment · In Uncategorized

Seeking a moratorium is the best strategy for stopping executions in Texas. It worked in Illinois, it can work in Texas.

From the Dallas Morning News today:

It’s clear Texas law-enforcement officials and courts have gotten it terribly wrong at times, so much so that a moratorium is just as appropriate in Texas today as it was in Illinois in 2000.

Questions cry out for answers about whether flaws in Texas justice run so deep that the death chamber should be dismantled. This newspaper believes it’s a system that cannot ever be fail-safe. While many Texans vehemently disagree, still others are conflicted over the matter. Experts and state officials must have the chance to address these issues without the death row conveyor belt moving in the background.

Lawmakers in Austin need to support a moratorium.

The full editorial can be read here.