Dallas DA Craig Watkins Says Any Reasonable Person Would Conclude an Innocent Person Has Already Been Executed William Josef Berkley: ‘I didn’t kill her’; Scheduled for Execution Today in Texas

By Texas Moratorium Network On April 21, 2010 · Add Comment · In Uncategorized 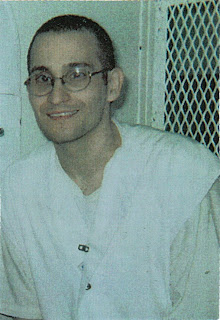 William Josef Berkley is scheduled for execution in Texas on Thursday, April 22.

Please call Rick Perry at 512 463 1782 or use his website form to email Governor Perry to express your opposition to the execution or to the death penalty.

If executed, Berkley would be the 453rd person executed in Texas since executions resumed in Texas in 1982.

Attorneys for William Josef Berkley are asking a federal appeals court to block his execution.

Berkley, 31, has been on death row for eight years in the robbery, rape and murder of 18-year-old Sophia Martinez. Attorneys Leon Schydlower and Cori Harbour asked the Fifth Circuit U.S. Court of Appeals for a stay of execution based on flawed testimony from a prosecution expert witness regarding bullets used in the crime.

From the El Paso Times:

EL PASO — William Josef Berkley, who is to be put to death this week for killing 18-year-old Sophia Martinez, has personally made two requests to block his execution.

In addition, two El Paso attorneys have sought a stay of execution on Berkley’s behalf, challenging the expert testimony at his trial.

Berkley and the attorneys filed their motions in the 243rd District Court, where Judge David Guaderrama presides. Guaderrama also was the judge at Berkley’s trial.

Jurors convicted and sentenced Berkley in 2002 for Martinez’s murder. He shot and robbed her in March 2000 at an East Side ATM, took her to the Northeast desert, raped her and shot her again.
Martinez was a senior at Burges High School who dreamed of becoming a history teacher. Her two sisters and mother, Lourdes Licerio, plan to be at Berkley’s execution Thursday in Huntsville.

Berkley recently filed a writ asking that his death sentence be thrown out because it violated double jeopardy laws.

Berkley stated he could have been sentenced to either death or prison time. He argued that since he is serving prison time while awaiting execution, he is essentially serving two sentences.
Guaderrama denied Berkley’s request, but on April 12 Berkley filed a handwritten appeal and asked for a stay of execution so that his argument could be heard by the state Court of Criminal Appeals.

Berkley wrote of his concerns about prison guards possibly throwing away inmates’ mail and about the prison law library’s outdated law books.

Berkley has told The Associated Press that he no longer has an attorney. On the same day Berkley filed his most recent appeal, attorneys Leon Schydlower and Cori Harbour requested a stay of execution for him based on testimony from Diana Grant, an FBI forensic examiner.

Schydlower and Harbour, who declined to be interviewed, argued that, after FBI officials reviewed Grant’s testimony in 2008, they determined it was “misleading and scientifically unsupported.” Last year, FBI officials disavowed the testimony.

Other evidence prosecutors presented to the jury included testing that placed Berkley’s DNA on Martinez’s body, and witness testimony that Berkley burned Martinez’s driver’s license in a barbecue grill.

Berkley’s trial attorney, Frank Macias, said last week that Berkley may not have many chances left to save his life.

“I think the appeals for him have finished,” Macias said.

He said he had not spoken to Berkley since he was transferred to the state prison in Livingston, but he remembers the case well.

“He came from a real good family. His father was a high-ranking noncommissioned officer in the Army and his mother was from Germany. They’re both really nice people,” Macias said.

“By the time I got to meet Berkley, when he wasn’t on drugs and just Berkley, he was the nicest guy in the world,” Macias said. “It pains me to know they’re going to execute him.”

According to court records, Berkley was born in Germany but is a U.S. citizen. He moved to El Paso as a child.

During Berkley’s trial, two of his friends described him as an outcast who often lied. He told people he was a gang member until actual gang members beat him up. Friends also testified that Berkley often used drugs, including crack.

According to court records regarding Berkley’s history, he often told friends that the “best way to relieve stress was to unload a clip into someone’s head.”

Prosecutors also accused Berkley of assaulting his mother and, as a student at Magoffin Middle School, a teacher and a female student, courts records show.

One witness also claimed that Berkley laughed when he read a newspaper article about Martinez’s death, prosecutors said in the records.

In one Internet posting, Berkley asks for help in his legal research and proclaims his love for his 13-year-old daughter. Her whereabouts and the whereabouts of the girl’s mother are unknown.

“I am innocent and I know everybody says that, but I have VERY VERY strong proof here in my cell. I have had court-appointed attorneys throughout my appeals and they have not done good jobs, so I have been representing myself in court,” Berkley wrote in the posting, which he signed with his nickname, “Ghost.”

Macias said he thought Berkley got as fair a trial as possible.

“I don’t think he would have gotten a fair trial anyplace else in Texas, and he got the fairest he could here in El Paso,” Macias said.

Prison officials said Berkley would be executed through injections of three different drugs.

The first drug, sodium thiopental, would sedate him. A second drug, the muscle relaxant pancuronium bromide, would collapse his diaphragm and lungs. The third drug used, potassium chloride, would stop his heart.

Prison officials said executed inmates are usually pronounced dead within seven minutes. The cost per execution for the drugs used is $86.08.