William Josef Berkley: ‘I didn’t kill her’; Scheduled for Execution Today in Texas 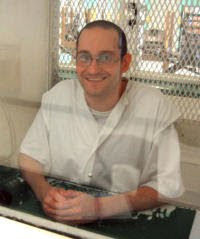 The El Paso Times has run has run several long articles recently covering the case of William Josef Berkley, who was convicted and sentenced to death in El Paso. In the latest article, Berkley again says “I didn’t kill her”. He is scheduled to be executed today at 6 PM.

Call the governor at 512 463 1782 to express your opposition to this execution. Or use Rick Perry’s online website contact form.

LIVINGSTON, Texas — The day before his scheduled execution, William Josef Berkley was eerily calm, at times joking.
Berkley, 31, sat in a glassed cage during a 45-minute interview with the El Paso Times, a prison guard standing behind him. The bridge of his round silver-framed glasses was crudely repaired with Scotch tape, and he was quick to smile. At one point, he stuck out his tongue as he was photographed.
But when asked whether he was the man responsible for the brutal robbery, rape and murder of 18-year-old Sophia Martinez in 2000, he grew serious, and his gentle grasp on a telephone used to communicate did not change.
“I didn’t kill her,” Berkley said in a soft voice.
He didn’t appear very concerned about his execution,